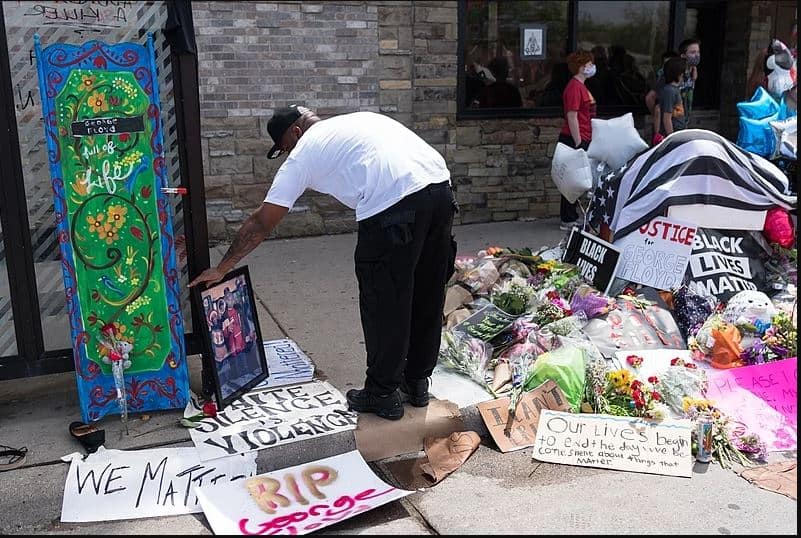 In the wake of mass rioting and destruction following the brutal death of George Floyd at the hands of the police in Minneapolis, church leaders in America are appealing for an end to violence and racial inequality and the assertion of justice. George Floyd was a Christian and community leader who mentored young men in church projects in Houston, before moving to Minneapolis with a Christian work project. Protests against his killing have emerged across the globe. Church leaders from the main Roman Catholic and Baptist denominations say they cannot remain silent in the face of injustice and described racism as a ‘real and present danger’.
A statement from the Southern Baptist Convention leaders said: “While all must grieve, we understand that in the hearts of our fellow citizens of colour, incidents like these connect to a long history of unequal justice in our country, going back to the grievous Jim Crow and slavery eras. The images and information we have available to us in this case are horrific and remind us that there is much more work to be done to ensure that there is not even a hint of racial inequity in the distribution of justice in our country. We grieve to see examples of the misuse of force and call for these issues to be addressed with speed and justice.”

Pope Francis joined other faith leaders for a Church of England online service for Pentecost, on Sunday morning. It marked the end of the prayer movement season ‘Thy Kingdom Come’, which has been observed in more than 65 countries. The Pope said: “On the day of Pentecost people who spoke different languages assembled and encountered one another. In these months, however, we have been required to observe appropriate and necessary measures to keep our distance from one another. Yet we have also come to understand better in our hearts what others are experiencing. We have been brought together by fear and uncertainty. How many troubled and broken hearts are in need of comfort?”

Twenty-five church leaders are seeking a judicial review of the ‘blanket lockdown’ imposed by the government, which has closed all churches to worshippers. Citing judgments of the European Court of Human Rights, they say a public authority may not interfere with the internal workings of a church or religious organisation and may not impose rigid conditions on the practice or functioning of religious beliefs. The signatories include leaders of large black and evangelical churches and Dr Gavin Ashenden, former chaplain to the queen. Their cause is supported by the evangelical group Christian Concern and their solicitors’ letter is asking for a government response by 4 June 2020.

The government has indicated that places of worship in England will probably open soon for private prayer, small weddings and services with small congregations. The communities secretary Robert Jenrick told the coronavirus briefing on Sunday that he wanted places of worship open “as quickly as we can”. He said: “I understand how important it is for millions of people in this country, and I can understand how people of faith would consider it strange that shops, cafes, pubs, restaurants, many other settings, might be open in the weeks and months ahead, but not somewhere as important as a place of worship.” He added that large worship gatherings where hymns were sung, posed a particular threat of spreading Covid19, as the people exhaled.

A taskforce with representatives of major faiths is meeting to decide the details of when and how places of worship may open. But its progress is slow, leading to pained interventions from faith leaders this weekend:
Cardinal Vincent Nichols, speaking at Westminster Cathedral on Pentecost Sunday, questioned the reasons for churches to remained closed. “We are told that these openings, which are to be carefully managed, are based on the need to encourage key activities to start up again. Why are churches excluded from this decision? … It is now time to move to the phased opening of our churches.”
The Guardian reported that the Anglican Bishop of London Sarah Mullaly had said: “With shops reopening and some people appearing to be returning to a degree of normality, it is understandable that questions are being raised as to how and where the lockdown is being relaxed. Churchgoers are among those feeling real disappointment and hurt, as places of worship remain closed to the public.”
The Bishop of Worcester John Inge  tweeted: “I think we should either be arguing (a) that it is too soon to open other buildings or (b) that our churches should be allowed to open alongside them. To suggest that our churches should remain closed whilst other ‘non-essential’ shops and buildings open is to condone secularism.”

Jasvir Singh, a barrister and chair of City Sikhs, has been forced to quit the government’s taskforce on re-opening places of worship, after complaints by the Sikh Federation. Its adviser, Jas Singh, told the Sunday programme on BBC Radio 4 that the government had selected Jasvir Singh without consultation or explanation.  ‘This was a huge insult to the whole Sikh Community’ and he did not condone threats of any kind, he said. A government statement said: “It is with great regret Jasvir Singh has made the personal decision to step down from the Government’s Places of Worship taskforce. Since his appointment, he has experienced a sustained campaign of abuse, intimidation and threats against him and his family and we condemn this in the strongest possible terms. The Government will continue to work closely with Mr Singh and thanks him for his valuable work to date, including helping to build links between Gurdwara Aid and Government to better support and address the needs of the British Sikh Community.” The Faith Minister Steven Greenhalgh tweeted that Jasvir Singh ‘remains a much respected colleague’.