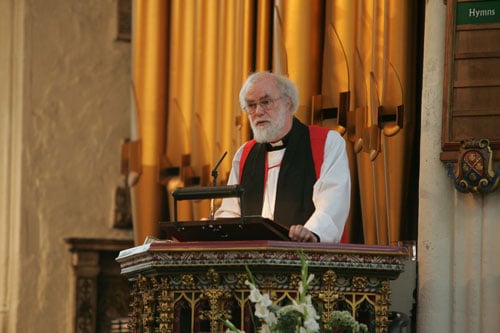 The former Archbishop of Canterbury, Rowan Williams, has paid tribute to the Duke of Edinburgh, recalling the “terrifying experience” of delivering a sermon in front of the Queen’s consort.

Addressing the Religion Media Festival — Exploring Belief — today, Lord Williams said: “That was a very terrifying experience, I can tell you. He made it very clear what he thought a good sermon required.

“I was told very, very firmly, that going over eight minutes would probably land me in the Tower of London.”

Sharing his recollections of the duke, Lord Williams said he was struck by how Prince Philip maintained an interest in the Greek language and the Greek Bible of his birthplace — despite being forced into exile as a toddler.

“He was undoubtedly one of the most powerful and coherent religious voices in the public square in Britain,” he said. “I enjoyed his company, I learnt from him enormously and miss him greatly.”

Shortly before his death in November 2020, Lords Sacks penned a dedication for Lord Williams’s new book, Candles in the Dark: Faith, Hope and Love in a Time of Pandemic. “One of today’s most brilliant and profound thinkers,” he wrote.

In conversation with BBC presenter Roger Bolton, Lord Williams described the transition from being master of Magdalene College, Cambridge, to his retirement in Wales over the autumn.

He admitted that the pandemic had been “stressful”, while also finding it difficult to “switch off” from the “sheer pressure of trying to run an institution in the middle of rapidly changing circumstances”.

When asked if he agreed, Lord Williams said: “Hindsight is really very easy. We were all under pressure, we all made the best decisions we could, but that was certainly something [places of worship] people felt the absence of.”

That said, he acknowledged that online services had made the church more accessible. “Being able to slip in … to the online world has kept the door open for people who might otherwise have been outside,” he said.

Whether congregants return in force to places of worship remains to be seen, he said. “I suspect they will, because people value the actual physical contact … they value that sense of informal togetherness.

“But I hope that we will keep on asking ‘well, what can we do to make sure that we keep open the doors that have almost accidentally swung open during this period for those people who find it difficult?’”

When asked how God could have allowed the pandemic to happen, he said: “My own view, for what it’s worth, is that God in creation allows a world to come into being which follows its own innate laws. God has put them in place, but they are evolving, unpredictable, sometimes conflicted.”

God’s role now, he said, was “to bring a future that has healing hope in it”. One area that requires much healing, he suggested, was the sense of inequality across British society.

Instead of erasing our past, however, Dr Williams believes we should focus on context.  “Remember, your history, like everybody’s history, is a blend of good and evil. Admitting that we’ve got things wrong in the past isn’t a sign of weakness.”

He revealed that Magdalene College commissioned some research into its background,  triggered by the Black Lives Matter campaign. The results were “a bit of a shock”, he said, as they revealed that notable alumni — including the celebrated diarist Samuel Pepys — profited from slavery.

As with many British institutions, he said, the Church of England has a role to play in righting the wrongs of the past.

When asked if the church was “institutionally racist”, he said: “The words institutionally racist, always sound a bit as though we’re saying the Church of England is full of racists, as if the average Sunday morning congregation is full of people with swastikas and rather tattered St. George’s Cross flags … and obviously that that’s not how it works.

“It’s not a matter of apportioning blame or guilt. It’s simply saying, like pretty well every British institution, the church is unconsciously bound into a system, which … disadvantages people from non-white backgrounds.”

Lessons, he believes, have to be learnt and acted upon. In addition to recognising the role of those from minority backgrounds, he hopes our appreciation of key workers will endure.

“I’d like to think that we would take the opportunity of saying, are we adequately rewarding those who do the heavy lifting for our common good, those who just keep the wheels turning day by day?”

It was also vital that we learn to work with other countries to confront global issues, Lord Williams said.

Thinking about “effective means of international action and co-operation” will make for “more prompt, more cohesive, more effective” action for future pandemics and even the “the climate emergency which presses on us”.