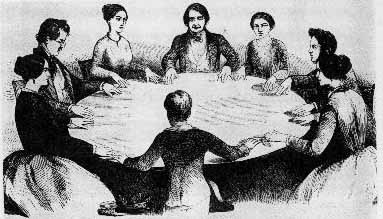 Hydesville Day, 31 March, is the official day for the international recognition of Spiritualism. It was the date in 1848 when two sisters living in Hydesville, New York State, first experienced strange rappings, which were thought to be communications “from the other side”.

The emergence of Spiritualism as a popular movement began in the United States in the mid-1800s and has courted controversy since. It is defined more as a movement than an organised religion, covering myriad practices, from overtly Christian to vehemently atheist.

It is based on the belief that departed souls can interact with the living. Spiritualists seek to make contact with the dead, usually through the assistance of a medium, a person believed to have the ability to contact spirits directly.

The Fox sisters played an important role in its creation, even though they later confessed to fraud.

In the mid-1800s, reports began emerging that Kate and Margaret Fox had made a connection with the spirit of a man apparently murdered in their home in the hamlet of Hydesville.

Kate, 11, and Margaret, 14, were soon known in the neighbourhood for their apparent dialogue with the dead, requiring their mother to write a supporting statement confirming her own observations.

Communications took the form of “rappings”, which the sisters interpreted as messages from beyond the grave. This, along with other manifestations — seeing or hearing spirits, visions, emotional or physical reactions, other noises and more — now make up the core components of “spiritual channelling”.

The practice of the séance, communication with spirits, spread rapidly, particularly in Britain and France and became a popular pastime in Victorian drawing rooms, at a time when many families were ravaged by tragedy — from high infant mortality, cholera, typhoid, and war. The first Spiritualist church in the UK opened in Keighley, Yorkshire, in 1853.

The Fox sisters became world-famous, going on tour with public séances across the US. They had relentless supporters — and critics — gaining followers craving their “spiritual counselling” as well as anger and dismissal from many church leaders.

In 1872, Kate married a London barrister and spiritualist convert, moving to England and performing séances for the rich and famous. Despite their sudden fame, Kate and Margaret Fox struggled with alcoholism, and publicly denounced their communication with the dead as a fake circus. In 1888, Margaret confessed the rapping sounds had been created by her double-jointed big toe.

The New York Herald reported on 22 October, 1888: “There stood a black-robed, sharp-faced widow, working her big toe and solemnly declaring that it was in this way she created the excitement that has driven so many persons to suicide or insanity. One moment it was ludicrous, the next it was weird.”

Both she and Kate had begun it, Margaret said, as a prank on their superstitious mother. Spiritualists condemned her confession as a lie, told probably for money and possibly under the influence of alcohol.

Kate died in 1892 and Margaret a year later. Both sisters lived their final years in poverty and were buried without ceremony in paupers’ graves.

About that time, Spiritualism gained one of its most celebrated adherents: Arthur Conan Doyle, the creator of Sherlock Holmes. Doyle joined the Society for Psychical Research in 1893 and experimented with table-tipping and “automatic writing” as possible methods of contacting the spirits. In 1917, during the Great War, when nearly every household in Britain had suffered loss, Doyle gave his first public lecture on Spiritualism.

The state of New York is known as a hub for intense religious activity — the Mormon church and Millerism (the precursor to Seventh-Day Adventism) were also formalised from this area.

The Fox family’s original cottage has long been a place of pilgrimage for those interested in the birth of the Spiritualism movement.

In 1916, the cottage was moved to Lily Dale within New York State, but burnt down in 1955. A replica was built but that burnt down, too, in 1983. The National Spiritualist Association of Churches then bought the plot where a museum is dedicated to the spiritualist movement in the area.

The 300 residents of the town of Lily Dale, also an important place to early Spiritualists who felt “guided” by the dead to commune there in the 1870s, now welcomes more than 22,000 people each summer for talks and events and bills itself as “the world’s largest centre for the science, philosophy and religion of Spiritualism”.

Hydesville Day is marked online by churches and organisations in the UK, including the Spiritualists’ National Union.

Margaret and Catherine Fox in the Encyclopaedia Britannica