When someone in the public eye dies, it is not unusual for an abundance of tributes on social media.

It is rare, however, to see a tidal wave of condolences such as that triggered by the death of Rabbi Lord Sacks this weekend.

On the same day Joe Biden’s campaign for healing and unity culminated in victory, Britain lost a spiritual leader remembered variously as a “towering intellect”, a “beloved mentor”, an “inspirational leader” and the “most wonderful and compassionate of human beings”.

In normal times, hundreds if not thousands would likely have turned out for the funeral of the man who was Britain’s Orthodox chief rabbi for 22 years until 2013, and was made a life peer in 2009.

Yet restrictions imposed by the Covid-19 pandemic meant his burial — within a day of his death being being announced, in accordance with Jewish tradition — was attended by only a few mourners. Indeed the current chief rabbi, Ephraim Mirvis, was forced to stay away because he is self-isolating. Instead, a colleague delivered his eulogy, in which he described his predecessor’s “remarkable legacy”.

Videoed eulogies have been posted online from leading rabbis, as well as a heart-rending tribute from his daughter Gila.

It was only last month that news broke of Sacks’s cancer diagnosis. He had been treated successfully twice before.

While his loss is felt keenly by the Jewish community, tributes have poured in from all walks of life.

In 2016 Jonathan Sacks was awarded the Templeton Prize which honours those whose work advances the cause of “progress in religion”.

The awarding body said then: “It was his central message of appreciation and respect of all faiths, with an emphasis that recognising the values of each is the only path to effectively combat the global rise of violence and terrorism, which set him apart as one of the world’s most respected intellectuals and admired religious leaders.”

The Prince of Wales expressed his “most profound personal sorrow” at the news, saying “the Jewish community, our nation, and the entire world have lost a leader whose wisdom, scholarship and humanity were without equal”.

Though he came from an observant family, Sacks’s background differed from others who pursued the same path — including his predecessor Lord Jakobovits and the incumbent Chief Rabbi Mirvis.

Sacks, born in 1948, did not hail from a family of rabbinical scholars, but attended his local grammar school before graduating from Gonville and Caius College, Cambridge, which this week flying its flag at half-mast.

He continued studying at London’s Etz Chaim Yeshiva and received a PhD from London University. His first rabbinic appointment was at Golders Green Synagogue, later taking over at the Western Marble Arch Synagogue from 1983 to 1990. The next year he became chief rabbi of the United Hebrew Congregations of the Commonwealth, a position he held until 2013.

His tenure was not without controversy, however, as some felt he was in thrall to the strictly Orthodox element. This surfaced most notably in 1996 after the death of Holocaust survivor Rabbi Hugo Gryn, a leading figure in Reform Judaism. At the time Sacks refused to attend the funeral, as doing so might have been seen as an acceptance of the progressive form of his religion.

So it is all the more impressive that the tributes have come from across the Jewish denominations.

In a piece for Jewish News, Rabbi Laura Janner-Klausner, who until earlier this year was Senior Rabbi for Reform Judaism, wrote: “A leader such as him, who elevated the British Jewish community globally, who crossed the boundaries of communities and ideologies, should be mourned universally.”

Meanwhile Rabbi Dr Andrew Goldstein, president of Liberal Judaism, wrote: “His wisdom and writings were appreciated by Jews and non-Jews across the spectrum of religious belief and within the secular academic world.”

An accomplished author, orator, broadcaster and philosopher, Sacks was deeply committed to inter-faith work and had huge crossover appeal. In his book The Dignity of Difference, he wrote: “The very fact that we are different means that what I lack, someone else has, and what someone else lacks, I have.”

In a particularly moving tribute, Cardinal Vincent Nichols, England and Wales’s most senior Roman Catholic, said: “I have lost a friend; the Jewish community a great leader; humanity an eloquent spokesman. May he rest in peace.”

Meanwhile the Archbishop of Canterbury, Justin Welby, wrote: “He had a deep commitment to interpersonal relationships — and when you met him you couldn’t help but be swept up in his delight at living, his sense of humour, his kindness, and his desire to know, understand and value others.”

Imam Qari Asim, a member of the Mosques and Imams National Advisory Board, tweeted: “@rabbisacks was a voice of wisdom & humanity. An exceptional Jewish leader who related faith & ethics to real world issues. He gave a powerful yet accessible language to faith in public life. His wisdom, prolific authorship of works & leadership will be missed.”

Just as he made friends within religious circles, Sacks had the ear of politicians across the board. While prime minister Boris Johnson said he was “deeply saddened” by the news, his predecessor Tony Blair wrote: “Jonathan was a wonderful friend, a beloved mentor, a philosopher of extraordinary insight and of course a religious leader respected well beyond the Jewish community and well beyond the shores of Britain.” 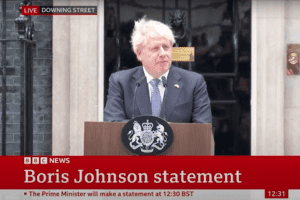 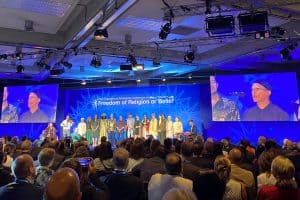