Islamophobia explained: how a definition will help to fight prejudice 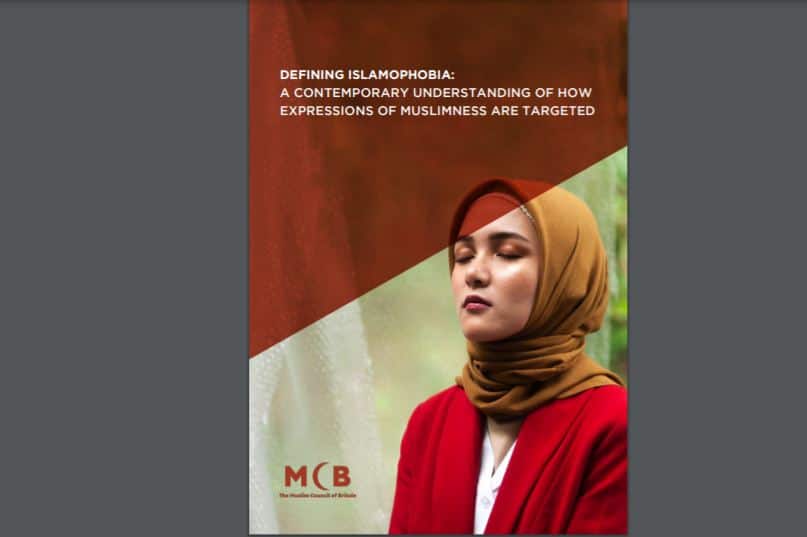 The Muslim Council of Britain has released a report on what does and does not constitute Islamophobia in society and how the definition of Islamophobia can be used to combat growing discrimination and prejudice against Muslims.

Building on the work of the All-Party Parliamentary Group on British Muslims, which defined Islamophobia as “rooted in racism and is a type of racism that targets expressions of Muslimness or perceived Muslimness”, the report seeks to tackle some of the criticisms levelled at the definition, such as concerns about its impact on free speech or that it could undermine efforts to tackle extremism.

Following widespread consultation, the all-party group came up with its statement in 2019 after it said the need for a formal definition was clear among Muslim communities who had been affected by racism at institutional and personal levels. The definition was adopted by main political parties, including Labour, the Liberal Democrats and SNP.

The government however, rejected the definition over concerns that the wording was too vague and could undermine efforts to tackle extremism.

Some have long advocated the use of “anti-Muslim hate” or “anti-Muslim racism” instead of “Islamophobia”. In May 2019 the government announced it would establish its own definition but nothing has yet been decided.

The latest report seeks to tackle some of those concerns, explains in further detail how Islamophobia manifests itself, and recommends steps to be undertaken in politics, the media, education and in workplaces to tackle Islamophobia.

According to State of Hate, a Hope Not Hate report in 2019, a third of Britons believe Islam threatens the British way of life. A similar number also believed the conspiracy theory that there were “no-go areas” in Britain where Sharia (Islamic law) dominated and non-Muslims could not enter. State of Hate also found that anti-Muslim prejudice had replaced immigration as the key driver behind the growth of the far right. More than half of all faith-based hate crimes recorded in England and Wales for 2017-18 were perpetrated against Muslims.

The latest MCB report says Islamophobia is “a type of racism, which has many different levels: systemic, institutional, interpersonal (including hate crime) and internalised beliefs”. To understand Islamophobia as a form of racism, it says, people must “recognise racism as a complex socio-cultural phenomenon, and the process of racialisation that Muslim populations have been subject to. Islamophobia is pervasive at all levels in the UK.”

The report argues that the all-party group’s definition can serve as a way of tackling Islamophobia and discrimination. “The existence of Islamophobia and the lack of political will to act against it affects not only Muslims but the social fabric of democratic society as a whole,” it adds.

It goes on to address criticisms of the definition. The free speech campaigner Robert Sharp said: “Bad and broad definitions can certainly chill free speech. But what those professing concern seem to forget is that the all-party group report is a response to that overreach. It is an initiative of ordinary Muslims (and their allies) that seeks to rein in those who would abuse the term Islamophobia. The intent and effect of a definition grounded in racism is to explicitly exclude blasphemy and historical criticisms.”

He added: “A definition of Islamophobia rooted in racism means focusing on prejudice against ‘expressions of Muslimness’ as they currently manifest themselves, rather than the protection of an underlying idea.”

The report also seeks to allay fears that the definition could undermine the fight against extremism or harm national security. Assistant Commissioner Neil Basu, the head of UK anti-terrorism, and Martin Hewitt, chairman of the National Police Chiefs’ Council, had initially expressed such concerns.

The report states: “It is necessary to document, however, the stark reversal in stance by both Neil Basu and Martin Hewitt by August 2019 in favour of the APPG definition, where they both urged prime minister Boris Johnson to adopt the definition, following dialogue with MPs and peers that resulted in both being reassured that the definition would not, in fact, hinder their work in fighting extremism.”

Being critical of Islam or religions in general is not considered to be Islamophobic, according to the report’s authors, “unless you were using the language of racism and Islamophobia”. It goes on to cite other examples of what does not constitute Islamophobia, dependent on context, such as “critiquing a specific practice that a proportion of Muslims engage in, based on a principle that is not specific to Muslims, including, for example, intellectually disagreeing with the wearing of specific Islamic dress”.

Highlighting and campaigning against criminality where Muslims are involved without impugning all Muslims is also not considered to be Islamophobic.

Before the report’s release, Zara Mohammed, secretary-general of the Muslim Council of Britain, said: “We need a robust way of understanding the nature and scale of Islamophobia. This report demonstrates how the APPG … definition of Islamophobia can equip us with the starting point to understand better the issues and facilitate a means to tackle the everyday issues Muslims face. We must move this conversation forward and create pathways to action with our partners and wider society.”

The Ministry of Housing, Communities and Local Government has been contacted for comment.

The Muslim Council of Britain is a national representative umbrella body with more than 500 affiliated national, regional and local organisations, including mosques, charities and schools.

Zara Mohammed, secretary-general of the Muslim Council of Britain.