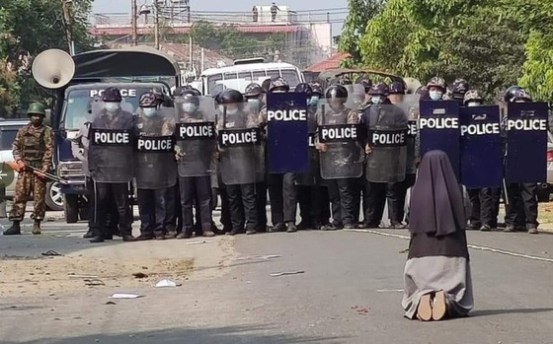 A nun who put herself between armed police and protesters in Myanmar has been praised for her “breathtaking courage”. In what was described as the country’s “Tiananmen moment”, Sister Ann Roza Nu Tawng knelt in front of a line of armed officers urging them not to shoot. The 45-year-old nun told Sky News: “I thought today is the day I will die. I decided to die … I thought it would be better if I died instead of many people.” After the protest in the city of Myitkyina, the nun tended to the injured. Speaking later from the St Francis Xavier Convent, she broke down, saying: “There’s no one to protect us.” At least 54 people have died in a series of mass protests in the country, also known as Burma, since the military seized power on 1 February. The protesters want an end to military rule and the release of the country’s elected leaders, including Aung San Suu Kyi. Her story is here

Reeling from the excoriating criticism in Harry and Meghan’s interview with Oprah Winfrey, Prince Charles carried on with public duties including visiting vaccination centres at Jesus House, a majority black church in London, and a pop-up vaccine centre at an evangelical church in Staples Corner. A doctor present at this visit said Prince Charles was interested in the progress of the vaccine roll-out, which had shone a spotlight on health inequalities in the different communities.

US chaplain chastises politicians for failing to unite around pandemic relief

The chaplain to the US House of Representatives chastised lawmakers during a prayer opening the session on Wednesday, asking God to forgive them for failing to unite around the $1.9 trillion pandemic relief legislation, the Religion News Service reports. Rear Admiral Margaret Grun Kibben, an ordained Presbyterian minister, couched the criticism thus: “Forgive them, all of them. For when called upon to respond to a once-in-a-century pandemic that has rocked our country, upended its economy and widened the chasm of partisan opinion, they have missed the opportunity to step above the fray and unite to attend to this national crisis.”

The Bishop of London Sarah Mullally has welcomed an amendment to the Domestic Abuse Bill to make non-fatal strangulation a specific criminal offence punishable by five years’ imprisonment. She said the change was the product of the persistence of an enormous number of brave women who campaigned for change so that strangulation is made a specific offence with the appropriate consequences to match .

Jayne Ozanne, a prominent evangelical and member of the CofE General Synod, has resigned from her post on the government equality LGBT advisory panel, blaming Boris Johnson’s administration for creating a hostile environment for LGBT people. Interviewed by ITN, she said the panel had seen an increasing lack of engagement and the actions of ministers “have frankly been against our advice”. The catalyst for her resignation was a debate in Parliament on gay conversion therapy after which she accused the government of dragging its heels. “I do not believe this Tory government, sadly, have the best wishes of the LGBT community at heart,” she said.

Pagans who entered a restricted area at Stonehenge to sing and touch the stones to practise their religious beliefs have lost a High Court attempt to overturn convictions for breaching regulations preserving the monument. They argued that they had a “reasonable excuse” to breach the rules because the restrictions infringed their rights to freedom of religion, expression and lawful protest. But Lord Justice Dingemans said the right to exercise religious freedoms would not strike a fair balance with the community rights to see Stonehenge preserved for present and future generations.

Welsh call for Stonehenge to be ‘repatriated’ to Preseli

Stonehenge should be repatriated to the Cardigan Island Coastal Farm Park in Pembrokeshire, says its owner Lyn Jenkins. He says Welsh people should “reclaim” the 5,000-year-old structure and install them as a tourist attraction for millions of visitors across the border — and the bill should be met by teh British government. Research suggests that the stones came from the Preseli mountains in Wales, possibly from a dismantled stone circle Wuan Mawm, and were taken 175 miles to their home at Salisbury Plain. A petition has been set up by Welsh nationalists also calling for the stones to be returned to Wales. Organiser Iwan ap Dafydd wrote: “The circumstances of this removal are impossible to determine therefore it would be prudent that they should be returned to their original location.” Full story In Your Area

Something you may not know about Piers Morgan

Journalist and presenter Piers Morgan is apparently unrepentant about his criticism of the Duchess of Sussex, telling reporters yesterday he believes in freedom of speech. He left ITV’s Good Morning Britain programme after his comments prompted more than 41,000 complaints to Ofcom. Morgan, a Catholic — thanks, he says, largely to his mother — is planning to re-emerge after a period of “temporary hibernation”. But one thing he’s unlikely to be doing is going to confession, having told a journalist from the Financial Times in 2017: “I don’t go to confession, probably because it would take me too long … I pray occasionally … I find it comforting that there is something to pray to … I do believe in an afterlife. I do believe that people who meant a lot to me are up there looking down and I do believe if I talk directly to them they might help me. And it’s been quite effective. I’m still sitting here, I’m being interviewed by the FT.”