The House of Lords has debated concerns about the treatment of all religious minorities in India under the Narendra Modi regime. In a debate on human rights abuses, Lord Indarjit Singh of Wimbledon said there were attempts to absorb Sikhs into the Hindu fold, contrary to their beliefs. Farmers including many Sikhs from Punjab have been camping outside Delhi for more than a year, in protest at new agriculture laws, but he said judges who challenge this are replaced, and protesting university lecturers and students are subjected to police brutality. Lord Harries of Pentregarth said Muslims, Christians and Dalits have also suffered in India. In reply, Lord Tariq Ahmed, Foreign Office minister said the UK would continue to engage with India on issues of trade, but that “human rights remain central to our thinking.”

The French National Assembly has passed an “anti-separatism” bill to combat the threat from extremists, which has been criticised as anti-Muslim. The National explains that, following the beheading of Samuel Paty, a teacher who showed cartoons of the Prophet Mohammed, anyone found guilty of endangering civil servants by spreading information which could identify them now faces fines and three years in jail. Religious groups will have to declare donations from abroad of over €10,000 and local authorities have been given the power to shut down places of worship that proselytise anything deemed hateful or discriminatory. Online hate speech has also been criminalised. Prime Minister Jean Castex has denied the law is anti Muslim, saying it is a law of emancipation in the face of religious fanaticism.

The “Myriad” project, a Church  of England venture to create 10,000 new Christian groups led by lay people, has issued a statement denying that it means the end of the parish or priests. A row blew up when the project’s leader, Canon John McGinley, spoke of lay led groups being released from key limiting factors, without the need for a building, stipend and long, costly college-based training.  Parish priests, synod members and commentators reacted with fury. But in a statement, Myriad leaders say this was a misunderstanding: “We do not think that priests or parishes are limiting factors and we are not proposing that we divert resources away from them.  In fact, the proposal that lay people can be supported in leading new worshipping communities relies on ordained leaders with theological and pastoral understanding”.   Full story in the Church Times

The Vatican has revealed that it owns more than 5,000 properties – 4,051 in Italy and about 1,120 abroad, plus Vatican embassies around the world. Forty per cent of the Italian holdings are schools, convents and hospitals. A total of 86 per cent are rented out at reduced rates to church employees. Properties owned abroad are in upmarket locations in European cities, including Sloane Square, London. The information was released this weekend in the first-ever public budget for the Administration of the Patrimony of the Holy See, a general accounting office.

Pope: Grandparents and the young need to work together to prepare a better future

Sunday was the first world day of Grandparents and the Elderly, and Pope Francis appealed for efforts to breach the generational divide. The Pope is still recovering from intestinal surgery, so his message was read by an Archbishop. He said young and old needed to dream together, overcome conflicts and prepare a future together: “Young people, as prophets of the future, who treasure their own history. The elderly, who continue to dream and share their experience with the young, without standing in their way”.

Magistrates have quashed the fine on Joshua Sutcliffe, a Christian street preacher, who was prosecuted for breaching covid regulations while preaching and handing out leaflets in Camden on Good Friday. His case was taken up by the Christian Legal Centre. City of London magistrates judged he was not guilty on all charges as he had a reasonable excuse to travel to work and the small gathering was entitled to meet. Mr Sutcliffe told Premier Christian radio: “I felt like they were kind of targeting Christians. We weren’t causing harm. We were just pointing to Christ and talking about Christ.” 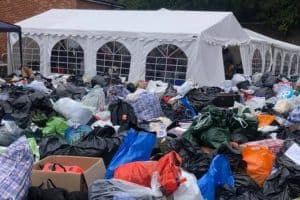