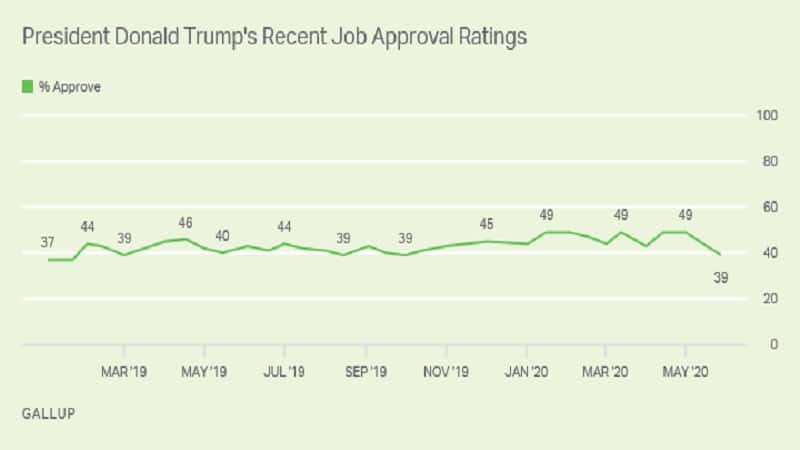 As Donald Trump’s poll ratings wobble all attention is focused on the white evangelical voters who delivered him the White House in the presidential election of 2016. But could it be the white Catholic vote which is decisive this time round?

At the beginning of March, support for Donald Trump among white evangelicals stood at 77 per cent. By the beginning of June it had fallen 15 points to 62 per cent. It looks like a dramatic fall, but pollsters say it does not spell a crisis for Trump. Indeed, given the economic and health ravages wrought by Covid-19 and the nationwide protests after the death of George Floyd, they might say the polls are holding up rather well. A poll for the Public Religion Research Institute, in 2017 showed that 31 per cent of white evangelicals said Donald Trump could do almost anything and they would still vote for him.

Nevertheless some leading players in the evangelical word are raising concern about elements of Trump’s programme. The National Association of Evangelicals (NAE), which represents 45,000 churches and 40 different denominations and which had a strong affiliation with the Reagan and Bush administrations, is more cautious when it comes to aligning itself with Trump.

“Donald Trump has done a lot of positive things in the area of international religious freedom,”  says Galen Carey, the NAE’s vice-president of government relations. “Last week he issued an executive order which means that every government officer going abroad will have to have training in international freedom issues.” But Mr Carey says the NAE has strongly opposed the Trump’s immigration policy, particularly because it affects the “dreamers” or undocumented children.

And for “Pray Together Sunday” last weekend the NAE posted a video from its leaders condemning racism. “We reject white supremacy. As evangelical Christians we believe racism is an affront to God. When sustained by an imbalance of power, racism moves beyond individual relationships to institutions and systems.”

Robert Jones, chief executive of the Public Religion Research Institute, says white evangelicals are not listening to their leaders. “Three major players in the evangelical world — the NAE, Russell Moore [who heads the Ethics and Religious Liberty Commission, the public policy arm of the Southern Baptist Convention], and the magazine Christianity Today have all staked out their opposition to a big part of President Trump’s platform and in every case it’s had no effect on attitudes on the ground. It hasn’t moved the needle at all, and that’s been the surprising thing for evangelical leaders — the people in the pews are not taking directions from them.”

Being a white evangelical is as much a political as a religious identity in the US. For those who might suppose that the more religious among them might hold more progressive views, Jones has more surprising news.

“You might expect that the more religiously connected you are the less likely you are to support Donald Trump, but it turns out the those who attend religious services are more likely to have a more favourable view of him. Higher church attendance correlates with more robust support for the president.”

White Catholic support for Trump, and for Republicans more generally, is much more slippery than among white evangelicals or white Christians. The recent PRRI poll measured their support at only 37 per cent — a 23-point drop on March’s figures, and the first time it has fallen below the national approval rating. “That’s extremely serious,” says Thomas Reese, a writer for the Religion News Service. “Catholics have voted for the winner in almost every presidential election. So they are a kind of bellwether for the nation.“

According to Reese, Trump’s recent attempt to woo Catholic voters has not gone down well. On 2 June, the day after the president posed outside St John’s episcopal church holding a Bible, he visited the shrine to John Paul II in Washington.

The pretext was the executive order on religious freedom that he was due to sign at the White House later in the day. The visit was criticised by Wilton Gregory, the Roman Catholic Archbishop of Washington, who said it was “baffling and reprehensible” that the shrine’s custodians, the Knights of Columbus, allowed it to go ahead.

“Donald Trump didn’t gain anything from his visit to the shrine. He’s lost his sense of showmanship. It’s become so politically transparent — and it’s hurting him,” says Reese, “When Archbishop Gregory gets up and condemns Trump’s presence at the shrine, that gets attention. Even people who would like Trump to be re-elected will be reluctant to join that parade.”

The white Catholic vote in the swing states of Michigan, Wisconsin and Pennsylvania was decisive in Donald Trump’s 2016 victory. Joe Biden, the Democrats’ candidate, is a practising Catholic. A swing of 10 per cent among this volatile section of the electorate could be enough to tip the balance in his favour in November.

“They could make all the difference,” says Jones, “If I were a Trump pollster I would be much more worried about the white Catholics than the white evangelicals.”