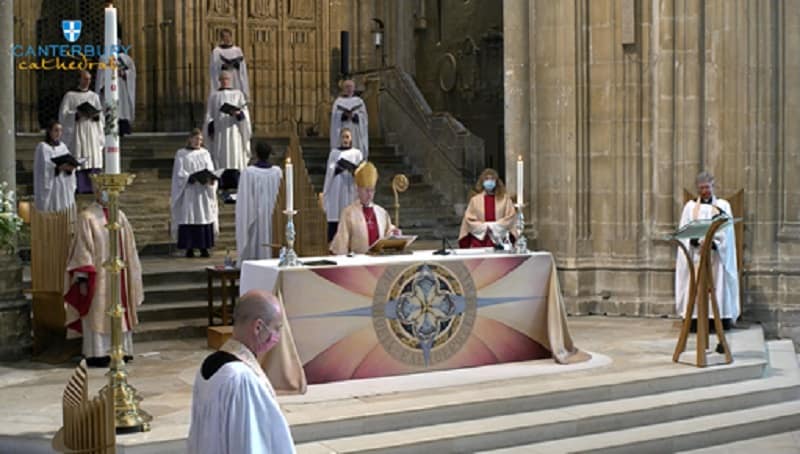 The Archbishop of Canterbury, Justin Welby, led a remembrance service for Prince Philip at Canterbury Cathedral on Sunday morning.

He said bereavement is a blow for any family:“For the royal family, as for every other, no words can reach into the depth of sorrow that goes into bereavement. We all know that it is not simply a factor of age or familiarity. It is not obliterated by the reality of a very long life remarkably led, nor is the predictability of death’s arrival a softening of the blow. Loss is loss.”

The Duke of Edinburgh had a remarkable willingness to take the hand he was dealt in life, he said, and to follow its call: “To search its meaning, to go out and on as sent, to inquire and think, to trust and to pray.”

“It is God who creates, God who calls, and God who sends”.

The archbishop commended prayers for comfort for the family and all those who grieve.

He said: “Our lives are not completed before death, but their eternity is prepared. So we can indeed pray that the Duke of Edinburgh may rest in peace and rise in glory”.

Earlier in a BBC interview, the former Archbishop of York, John Sentamu, said  he first discussed Christianity with the Duke, when he was worried about his children and their marriages.

“I said, ‘well, your royal highness, you are a family like any other family, and every family goes through good times and bad times – the important thing for me is that you should realise that if people are married they are not just a couple, there is a third and that’s Jesus Christ, and they should begin to go to Jesus Christ’.

“He said, ‘Of course, the Queen and I are so strong in Jesus Christ’.

“His faith was so strong, rooted in Christ, rooted in reality, rooted in his family, that he could be a free person. I have not met a couple that are so free – Her Majesty is exactly the same.”

Recalling a conversation about the Duke of Edinburgh award, Dr Sentamu said: “It was an eye opener. The award was in every country he had been to, and when he met young people – whether they were black, whether they were white, whether they were Asian – actually it didn’t make the slightest bit of difference, as long as they were given the opportunity to get on in life.”