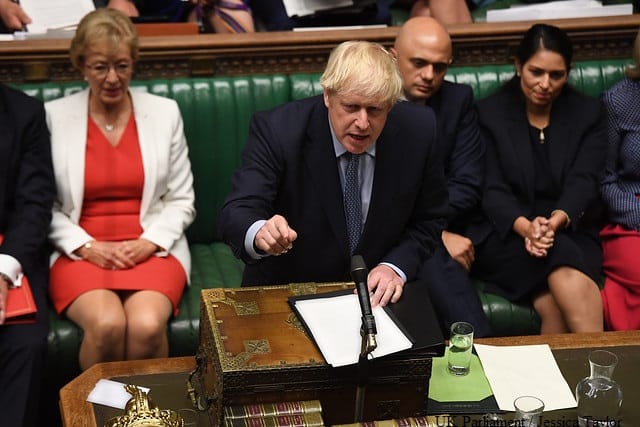 All Church of England bishops have rebuked MPs for unacceptable language in acrimonious debates in the Commons, calling for greater respect.

In a rare move, all 118 Church of England Bishops and Archbishops have issued a strongly worded statement saying that the use of language in debates inside and outside Parliament has been unacceptable. They said views of fellow citizens should not be denigrated but treated with respect. And they called on politicians to adhere to the rule of law and respect the judiciary.

Their intervention followed angry scenes in the House of Commons,  as MPs returned after the Supreme Court ruled the suspension of Parliament was unlawful.

Facing the Commons for the first time after the humiliation of that defeat,  the Attorney General and the Prime Minister came out defiant and fighting. But the tone and language goaded MPs and provoked ‘fear and loathing’ in Parliament.

The ugliest exchanges came when women MPs said the language of ‘surrender’, ‘betrayal’ and ‘capitulation’ made them out to be traitors, fuelling threats and attacks endangering their lives.   When challenged on his language by a Labour MP in the Commons and told he should be ashamed of himself, the Prime Minister said: ‘I have never heard so much humbug in my life’.

The explosion of anger has shocked other leaders in public life.  Alongside the Bishops, Jewish and Muslim leaders join them in appealing for a fundamental shift in values and behaviour.

And Humanists UK, of which the murdered MP Jo Cox was a member, has also joined this response, saying hostile language only causes harm.

A joint statement issued on behalf of the Church of England’s College of Bishops following a three day residential meeting this week:

‘As Bishops of the Church of England, we make this statement conscious of the great challenges to our nations and to their leaders. In writing, we affirm our respect for the June 2016 Referendum, and our belief that the result should be honoured. In the last few days, the use of language, both in debates and outside Parliament, has been unacceptable.

We should speak to others with respect. And we should also listen. We should do this especially with the poor, with the marginalised, and with those whose voices are often not heard in our national conversation. We should not denigrate, patronise or ignore the honest views of fellow citizens, but seek to respect their opinions, their participation in society, and their votes. The teachings of Jesus Christ call for us to be generous and humble servants; virtues which are for all leaders, whatever their faith.

We call on politicians to adhere rigorously to the rule of law and on all to respect and uphold the impartiality of the courts and our judiciary. Our concern is also for the structure and the constitution of the United Kingdom. To use the words of Jesus, we must renew the structures that enable us to “love one another”. Changes to our principles and values of government, if necessary, should be through careful planning and consultation.

It is easy to descend into division and abuse – climbing out and finding unity again takes far longer. Further entrenching our divisions, whether from uncertainty or from partisanship, is not worthy of our country nor the leadership we now need. We are a body that understands from our own experience the dangers of division. It is our view and most solemn warning that we must find better ways of acting.’

The life and death of Labour MP Jo Cox, who was shot and stabbed by a right-wing extremist a week before the 2016 referendum, has become a central element of  this story. Many women MPs have received  frequent death threats, fuelled by hostile language in political debate over Brexit.  Jo Cox was a member of Humanists UK. Before becoming an MP she devoted her life to humanitarian work – for Oxfam, on issues around pre-natal and childhood deaths around the world, advising the anti-slavery charity Freedom Fund and urging an ethical solution to the humanitarian crisis of the Syrian civil war. Andrew Copson, Chief Executive of Humanists UK:

‘Humanists share values which mean their ethical decisions are based on reason, empathy, and a concern for human beings.   Jo Cox, the Labour MP tragically murdered by a right wing extremist whose story is at the centre of the bitter exchanges in the Commons this week,  represented the best of Humanism – outward-looking, compassionate, humane, self-critical, warm, funny, and profoundly empathetic.  Values which have been in short supply in recent times.  Debate that’s principled and robust and from the heart can still nonetheless be conducted rationally and with respect for the dignity of those we disagree with. We should all work for these values in public life. Hostile language that regards people who disagree with us as enemies only causes harm. We need to learn how to disagree well if we are to avoid the heated ‘culture wars’ that can only make everyone’s lives more fraught and more miserable.  Jo Cox once said ‘We have more in common than divides us’. Even at this most polarised time, that’s still true.’

Harun Khan, Secretary General of the Muslim Council of Britain:

‘The language we use in our everyday life impacts those around us, enriching or destroying relationships. The language used by those in positions of power and influence has an untold influence on the nation.  At a time when the country has never been more polarised than it is now, words of reconciliation, contrition, and bridge building should be paramount. Words that stoke fear, violence or are threatening should have no place in public discourse. No matter our disagreements on issues of politics, showing dignity and respect for your opponent is a British value that we can all agree on. We can never lose sight of the oft-said, but no less true mantra of the late Jo Cox MP, that there is more we have in common than what divides us. People of faith, of no faith, leavers, remainers, all share in the unity of the human experience – we must find again that common humanity.’

‘Judaism has always understood the power of words, both to hurt and to heal. Rabbinic culture is one of discourse and debate including heated argument. But they carefully maintained the distinction between ‘arguments for the sake of heaven’, that is, in order to establish what is just and right, from arguments for the sake of power and ego. They respected persons and carefully recorded dissenting opinions. They understood that contempt and violent language can lead to violent acts.  Britain too has a long-standing culture of powerful disagreement, but it has almost always been moderated by civility and respect. These are matters we need to remember in these days of uncertainty and fear.’

An earlier intervention from the Archbishop of Canterbury, Justin Welby, speaking in the House of Lords on its first day back after the Supreme Court ruling that prorogation was null and void:

‘This debate demonstrates the total division across Parliament is only a shadow of the immense divisions across the country, which the bishops find at every level as they are immersed in every local community. And the divisions are shaking this country apart. They are shaking us apart in all our great institutions, whether it’s Parliament, the courts . ..and is causing serious damage to our economy.

What we are hearing in our debates here is the incapacity of Parliament not only to make a decision, but to find any way through a deadlock. The divisions are so deep that we cannot expect that cross party work could bring a decision on what we do.  But can we not at least ask the government to look at alternative means of setting a path to making a decision?

Because at the moment, we sit here listening and all we hear is that the decision is one side says it’s definitely this the other side says that – I’m used to this at an organisation that is split at every single level, I’m well aware of division. So, I’m speaking from deep familiarity! But the way forward must be, as we have done on numerous occasions, to work out how you get to a decision because the present means of handling it through Parliament is not working and we need to draw on wider experience, on mediation, on other forms so that operation yellow hammer and the statement we have heard at least forms part of a clear plan which will arrive at a firm decision.’

The Bishop of Leeds, Nick Baines, said in his blog:

‘The Prime Minister has a particular and weighty responsibility in our current crisis to lead by example. A fundamental element of strong leadership, rooted in character, is to demonstrate humility. The language he is using is destructive and has caused distress. An apology would be in order. More importantly, he needs to lead a recalibration of language, mood and relationship. What we are witnessing currently is the further corruption of our public discourse and the norms of democratic debate.’