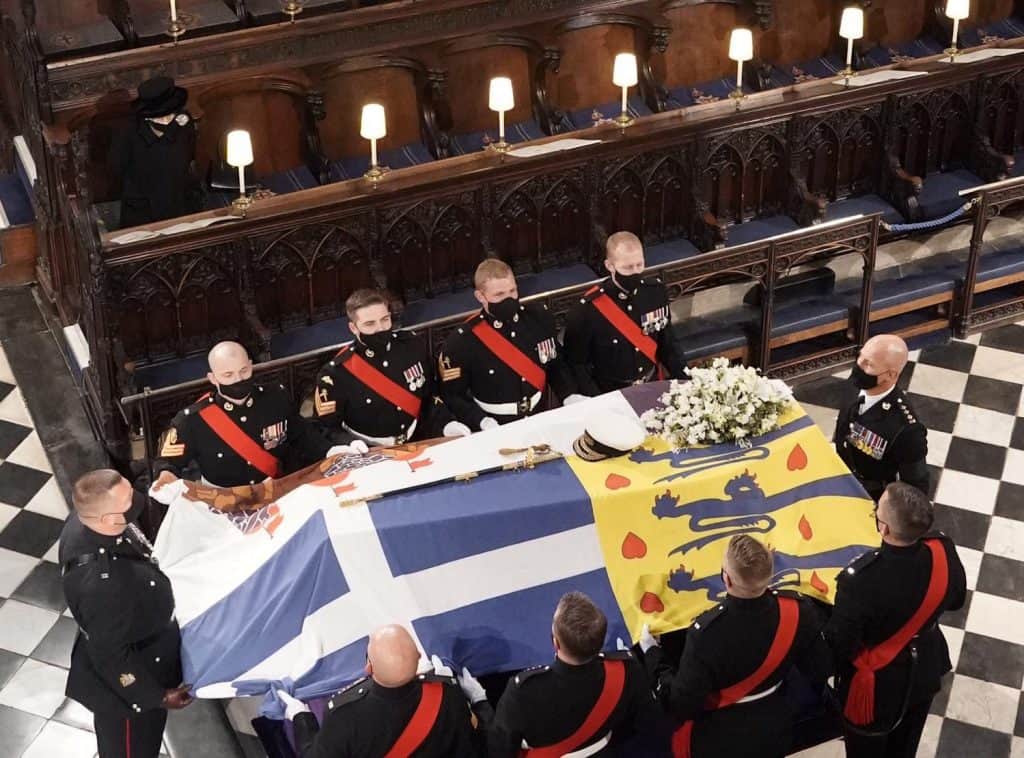 “We have been inspired by his unwavering loyalty to our Queen. Our lives have been enriched through the challenges that he has set us, the encouragement that he has given us, his kindness, humour, and humanity.”

The bidding prayer of the Dean of Windsor, David Conner, opening the funeral service of the Duke of Edinburgh, as he was laid to rest at St George’s Chapel, Windsor.

In a service planned by Prince Philip himself, there was no sermon, music by a choir of four singers performing in the nave, empty of its usual 800 seats, and an unusual choice of reading in praise of the creator.

Ecclesiasticus 43: “Look at the rainbow and praise its Maker. By the power of his thought he tamed the deep and planted it with islands. Those who sail the sea tell stories of its dangers, which astonish all who hear them.”

The choir sang Psalm 104 in a setting by William Lovelady: “My soul give praise unto the Lord of heaven, In majesty and honour clothed; The earth he made will not be moved, The seas he made to be its robe. Give praise.”

A prayer from the Archbishop of Canterbury gave thanks for Prince Philip’s “resolute faith and loyalty, for his high sense of duty and integrity, for his life of service to the nation and Commonwealth, and for the courage and inspiration of his leadership.”

Before the coffin, draped in his standard, with this ceremonial sword and naval cap and a wreath chosen by the Queen, was lowered to the vault, the dean read the final prayer:

“We praise thy holy name for thy servant Philip, Duke of Edinburgh, who has left us a fair pattern of valiant and true knighthood. Grant unto him the assurance of thine ancient promise that thou wilt ever be with those who go down to the sea in ships and occupy their business in great waters.”

Through the day, people influenced by his life spoke of their enduring gratitude for his contribution to the nation and to their lives.

The Duke of Edinburgh Award officers wrote: “Thank you, Your Royal Highness, for the incredible legacy you leave through DofE, empowering young people across the world with the skills, confidence and resilience to make the most of life and make a difference to the world around them.”

His family, in moving and sombre tribute, honoured his final journey with a procession behind the Land Rover hearse, from the castle to the chapel as the military, central to his life, formed on the quadrangle and lined the route.

The Queen, in lonely enforced isolation in the chapel, head bowed, remembering: “He has quite simply, been my strength and stay.”