There are reports that a new public holiday, the “Thank You Day”, will become a permanent fixture after being incorporated into the Queen’s jubilee weekend in June. The proposal was the brainchild of 13 people, including community campaigner Julie Siddiqi, as the country emerged from Covid lockdowns when clapping for the NHS  became a national event. It is supported by the Archbishop of Canterbury, the CBI and the TUC. The first Thank You Day was last July, and the second is on Sunday 5 June.  The Guardian reports that government ministers are weighing the economic cost of closing businesses for a day, the boost in hospitality and tourism and the positive effects on well being, as it takes its decision.

The former Prime Minister, David Cameron, says that the government’s “Prevent” strategy  should be robustly defended against attempts to undermine it by “Islamist campaigners and their allies”. In a foreword to a review of Prevent by the think tank Policy Exchange, he says that  young, vulnerable minds are warped by a “narrative” and there is a concerted campaign to misrepresent and undermine Prevent from small but vocal fringe groups.  The report names campaigns by the Muslim Council of Britain, Muslim Engagement and Development (MEND), and CAGE. The Times quotes all three organisations’ rebuttals.

The Archbishop of Canterbury, Justin Welby, has defended his intervention in the debate over sending asylum seekers to Rwanda. In an interview with The Telegraph, he says the church is not merely an observer of migration policy. Some bishops and clergy have themselves escaped persecution and conflict, the church provides practical support for refugees and has frequently spoken about the evil of people trafficking in the Lords and in local communities. “I want to put humanity and fairness at the heart of our asylum system. That is why the Church has called for safe and legal routes for asylum seekers, making visas available for humanitarian reasons, and helping families to be reunited”, he said. The Bishop of Durham, Paul Butler, writing in The Independent, said the Rwanda refugees plan flies in the face of Christian teaching and the government’s plan is troubling because it discharges  responsibility for welcoming the stranger.

Reuters reports that an appeal from the Interior Ministry to close a mosque in the southwestern town of Pessac for six months has been dismissed by a higher court. The mosque was closed last month on the grounds that it promoted radical Islam, incited hatred and justified terrorism. A local court suspended the closure, the government appealed, but the Conseil d’Etat rejected the appeal, deeming the closure “a serious and patently illegal violation of the freedom of worship”. The mosque’s lawyer aid no link had been established between the mosque’s activities and inciting terrorism. He said the Pessac mosque was an open and peaceful place of worship.

The Australian Cardinal George Pell has said that the Pope will intervene to end the possibility of a schism opening up in the church over German synod demands to change teaching on sexual ethics and allow same sex blessings. In a podcast for the Catholic Herald, he said the Pope’s role is to “maintain the purity of the apostolic tradition and the unity of the Church around that tradition”. He was among signatories to an open letter of correction sent to the German church warning that radical changes would inevitably result in schism.

Lambeth chief of staff steps down

The Archbishop of Canterbury’s chief of staff, David Porter, will step down this autumn after four years in the role.  In a statement he said he has offered Christian service for 40 years and is moving into a part time appointment instead, offering strategy on evangelism, reconciliation and the religious life.

The Dean of Llandaff, Gerwyn Capon, has withdrawn a complaint of bullying against the Bishop of Llandaff, June Osborne and the case is now dismissed. The Dean has been on sick leave with work-related depression for two years. A diocesan statement said he had “voluntarily and unconditionally” withdrawn the complaint. 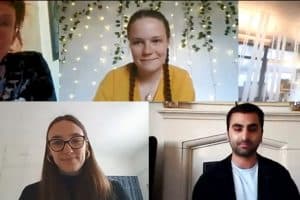