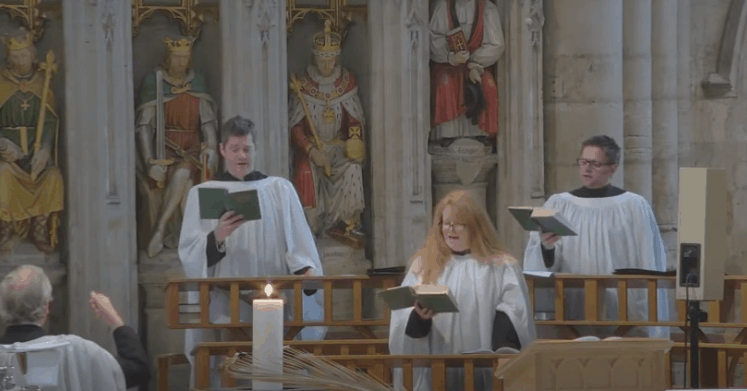 Covid-19 restrictions were eased this weekend to allow choirs to lead worship, an important concession as three religious festivals were observed, including Palm Sunday. Singers had to observe social distancing, standing two metres apart. Many churches had chosen to remain shut during this latest lockdown and for some this was the first service since the beginning of the year. Palm Sunday is the beginning of Holy Week leading up to Easter, marking the time Jesus entered Jerusalem on a donkey with crowds waving palms.

Also this weekend, Jews celebrated the beginning of Passover, an eight-day festival remembering the liberation of Jewish people from slavery in Egypt. And Hindus, Sikhs and Jains observed the festival of Holi, marking the triumph of good over evil.

The communities secretary Robert Jenrick has said that the protests outside Batley Grammar School, against a teacher showing a cartoon of the Prophet Muhammad, were not right. In media interviews, he said reports that the teacher was now in hiding were very disturbing and “it must be right that a teacher can appropriately show images of the Prophet Muhammad”. The school apologised and the teacher has been suspended, but a petition in his support has reached 54,000 signatures. In a statement, the protesters said the incident warranted a criminal investigation for stirring up religious hatred. Another parents’ group spoke yesterday and called for calm and space for a transparent investigation to take place and working towards an amicable solution. The Muslim Council of Britain said the cartoon was offensive and reported that parents said it increased Islamophobia. Engagement between the school and parents must remain measured, respectful and productive, it said. The National Secular Society said community cohesion and inclusiveness “cannot be achieved by pandering to religious groups who wish to dictate what can and cannot be taught”.

A suspected suicide bomber exploded a device at the main gate of the Roman Catholic Cathedral in Makassar, Indonesia, as the Palm Sunday mass was ending. The attacker had tried to enter the church precincts, but was stopped at the gate. At least 14 people were wounded inside the church and police say two people, believed to be the bombers, were killed. No one has admitted responsibility for the attack.

China retaliates against sanctions over its treatment of Uyghur people

China has imposed sanctions on politicians and others who have spoken out against the treatment of the mainly Muslim Uyghur people in the northwest of the country. They include MPs who tried to change a bill to prevent trade with countries guilty of genocide. The lead campaigner, Sir Iain Duncan Smith, said the sanctions were a “badge of honour”. The move was in retaliation to sanctions on Chinese officials imposed by Britain, the US, Canada and the European Union. China has repeatedly denied all accusations of abuse and an embassy spokesman said the stories were lies.

The Christian festival Spring Harvest Home 21 has engaged three party leaders to record messages for their online event over the Easter holiday. Boris Johnson, Sir Keir Starmer and Sir Ed Davey will thank the church for all it has done for society in the past year. Spring Harvest is organised by and for evangelical Christians, has been running for 42 years and is usually held at Butlins holiday camps, but this year is online.