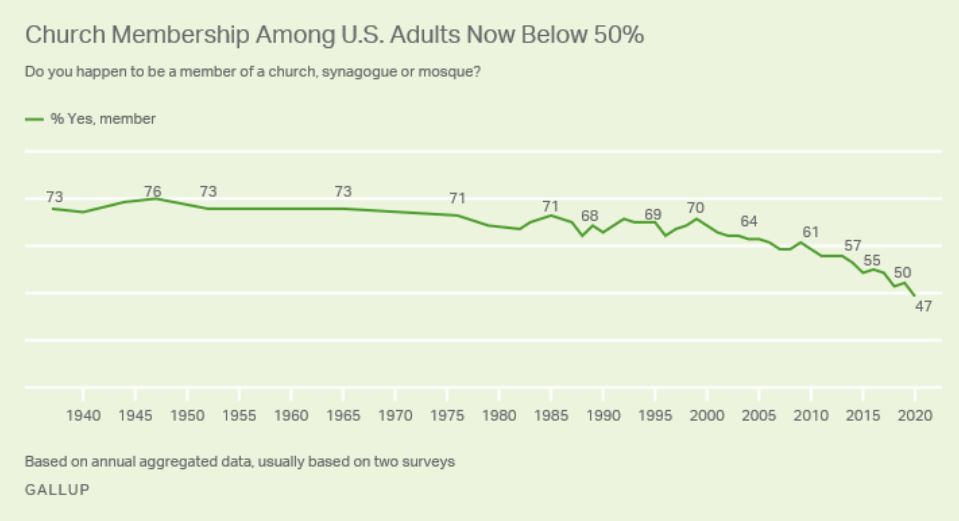 US religious membership falls below 50 per cent for first time

The Religion News Service reports that for the first time since the late 1930s, fewer than half of Americans say they belong to a church, synagogue or mosque, according to a new Gallup poll. A total of 47 per cent say they belong to a house of worship, down from 73 per cent in 1937, when polling began, accelerating after 1999. The stats are based on data from 6,000 people. It also reveals a rise in the “nones” who claim no religious affiliation, now standing at between 21 to 30 per cent.

No Jewish burials have been recorded for Covid-19 for the first time in a year. The Board of Deputies is advising caution as smaller burial societies do not report on a weekly basis, but the news has been welcomed. The Jewish Chronicle reports that last year in the same week, 97 deaths were recorded and since then 900 people have died.

Bishop says BBC has relegated religion to the God slot

The BBC has come in for attack for relegating religion to the “God slot” instead of reflecting it throughout all programmes. The Bishop of Ripon, Helen-Ann Hartley, wrote in Radio Times that faith has been “siloed off” to Songs of Praise and a handful of other programmes. The bishop, who chairs the Sandford St Martin Trust, which gives awards for programmes reflecting religion, took issue with a BBC statement saying: “It’s all very well having more content than ever before, but if most of it fails to get beyond the ‘God slot’ normally reserved for Songs of Praise, what’s the point, beyond keeping the faithful happy?”

The BBC said it “explores the big questions in life across its religious output, including new BBC One series Being and BBC Two’s Pilgrimage as well as The Big Questions, Moral Maze, Beyond Belief and the recent Radio 4 Rethink series. Our wider content, including programmes such as Pandemic 2020, Hospital and Roman Kemp: Our Silent Emergency also engages with values, ethical issues and questions of belief. In addition, providing opportunities for worship, reflection and celebration is an important part of our offer, particularly during Covid restrictions.”

The Bishop of Dover, Rose Hudson-Wilkin, joined showbiz and entertainment stars to urge black British people to get the Covid-19 vaccine. The letter said people found it hard to trust some institutions and authorities, but the facts on the safety of the vaccine from experts around the world indicated it was safe and would save lives. Official statistics suggest people from black African backgrounds are more than seven times as likely as white British people to have not received a coronavirus vaccine.

A conference on “Dismantling Whiteness: Critical White Theology”, has sold out. It is being organised for 17 April by the Regent’s Park College Oxford and the Oxford Centre for Religion and Culture, with discussions on whiteness and congregations, institutions, England and visual arts. The Rev Professor Anthony Reddie, director of the Oxford Centre, said on social media that he had come under attack from critics saying the concept crudely divided society into white and black, creating resentment and harm. In response, his supporters piled in.

Churches and Christian charities have urged the government to act now to prevent the harm caused by gambling. The deadline for submissions to the Gambling Act review was yesterday. The Rev Dr Susan Brown, from the Church of Scotland, said: “The harms of gambling have increased dramatically since the 2005 Gambling Act was passed, with the introduction of online gambling and new products which were not anticipated 15 years ago. We are asking for gambling advertising to banned or substantially reduced, along with greater protections for children.”

Cardinal Christoph Schönborn, the Roman Catholic Archbishop of Vienna, has said that the Vatican’s recent rejection of blessings for same-sex couples was marked by a “clear communication error”. The Catholic News Agency reports that he was concerned by both the timing and form of the ruling and expressed regret that same-sex couples felt hurt by the ruling.

Turkey will impose restrictions over the Muslim festival of Ramadan following a sharp increase in Covid-19 cases. The Associated Press says infections have tripled less than a month after authorities relaxed restrictions in some provinces. Istanbul and Ankara are among many provinces designated as very high-risk areas with weekend lockdowns declared.

The US secretary of state Antony Blinken is to repudiate the Trump policy of limiting human rights causes that the US pursues abroad. His predecessor, Mike Pompeo, sought to limit the number of freedoms defined in US foreign policy, favouring, for example, religious freedom and property matters, which were seen as conservative priorities. The Associated Press reports that reproductive and LGBTQ+ rights are expected to be included.