Majority of US religious organisations back Roe vs Wade

The stunning leak of a US Supreme Court opinion to strike down Roe v Wade, which guarantees federal protection for abortion rights in the United States, has received wildly differing reaction amongst religious groups in the United States. The Religion News Service quotes a Washington Post / ABC poll suggesting majorities of non-evangelical protestant Christians, Catholics and those who identify with no religion, say Roe v Wade should be supported, while 68 per cent of evangelicals support a ban on abortion. The RNS report canvasses views of many religious leaders from Franklin Graham:“Praise God”, to the Episcopalian church spokesperson: “an outrageous opinion”.

The Pope has said, once more. that it is necessary to “make every possible gesture to stop the war” in Ukraine. In an interview with the Italian newspaper Corriere della Sera, he said he would prefer to visit President Putin in Moscow first, before going to Kyiv. “First I must meet Putin. But I am also a priest, what can I do? I do what I can. If Putin would only open the door..”. He said he completely failed to understand why Patriarch Kirill, leader of the Russian Orthodox Church, justified the war in Ukraine.

The Church of England Evangelical Council has produced two new films giving guidance to church leaders holding conservative views, on how to respond to issues around human sexuality. The CEEC says the films and notes give biblical advice and urge leaders not to be silent but to speak out about their beliefs.  It is clear in the films that this advice advocates marriage between a man and a woman and one speaker suggests silence in the face of a society which has an opposing view, is theological cowardice. The films have been produced as the consultation period for “Living in Love and Faith” , a nationwide project asking all church members to engage with strongly held opposing views on same sex relationships, draws to a close. The same group produced a film earlier this year, “The Beautiful Story” which included an interview with Canon John McGinley,  director of church planting, who said he would not remain in communion with the Church of England if it changed its doctrine and practice in the area of sexual ethics.

The government has launched an appeal against the High Court decision to block the planned national Holocaust Memorial in Victoria Gardens, next to the Houses of Parliament. The Jewish Chronicle reports that he plans were blocked after a legal challenge, with the judgment saying that the site should be retained as an integral part of the gardens.

Tree of Life synagogue, scene of massacre, to be redesigned

The Tree of Life synagogue in Pittsburgh, Pennsylvania, where eleven people were killed in an antisemitic attack in 2018, has submitted plans to re-design the area. The Associated Press reports that a new complex on the same site would include a sanctuary, museum, memorial and centre for fighting antisemitism. The synagogue has been vacant since the attack. A man is awaiting trial.

Dr Rosemarie Mallett, born in Barbados and formerly an academic specialising in international development and ethno-cultural mental health, is to be the next bishop of Croydon. She has moved from being a parish priest to Archdeacon and becomes the first female bishop in the diocese, and the second bishop of Croydon, to come from Barbados

Female personifications of the divine, from Mother Earth to the Fairy Queen, may have been subject to ridicule and condemnation by institutional religion, but they have stubbornly resisted attempts to wipe them out. A Telegraph review of “Queens of the Wild” by Ronald Hutton, suggests new concerns about climate change and the environment have revived interest in personifying nature as deity. Reviewer Peter Stanford suggests folklore tales and images are “outward signs of a transcendent dimension that is beyond logic, reason, science and the control of organised religion”. 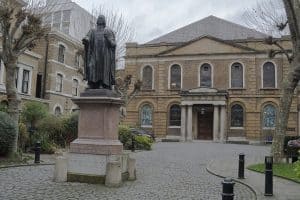