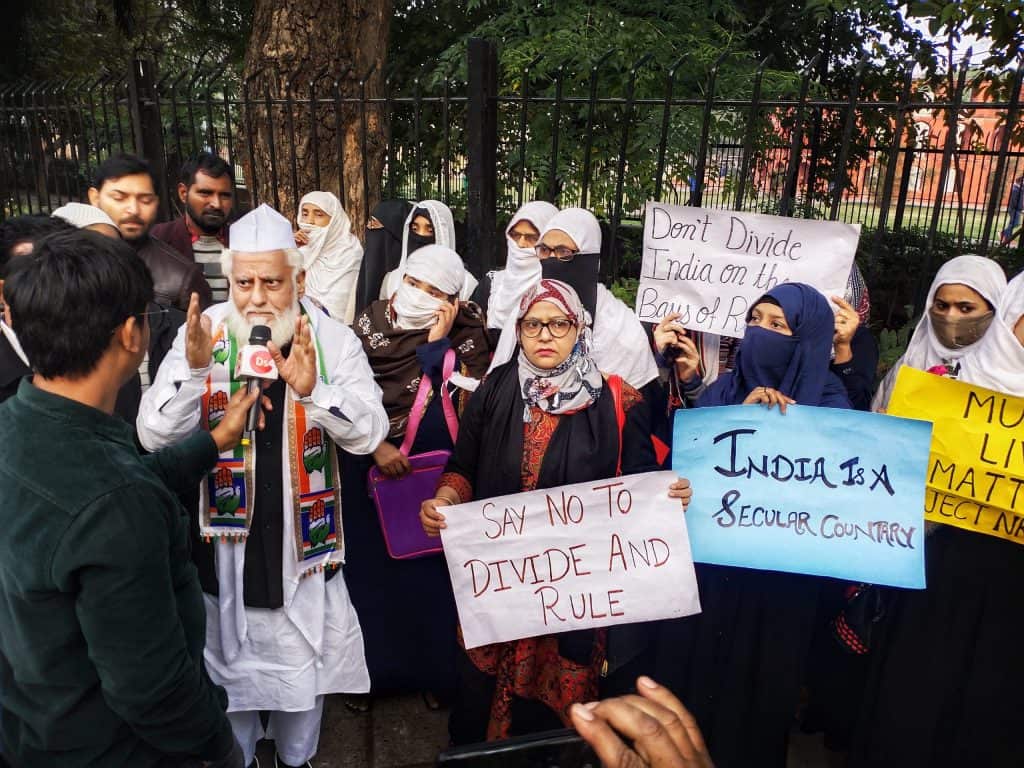 The unrest was sparked by protests, mainly by Muslims, against the Citizenship Amendment Act (CAA), a 2019 law that allowed refugees from neighbouring nations a pathway to citizenship unless they were Muslims.

Demonstrators are also concerned that a proposed National Register of Citizens could be used to deprive poorer Muslim Indians without documentation of their citizenship.

Kapil Mishra, a Delhi leader from the governing Bharatiya Janata Party (BJP), incited a crowd of his Hindu supporters to move violently a group of Muslims blocking a road in Delhi as part of the protests.

This action quickly spiralled into days of violence, where Hindu mobs armed with sticks and knives rampaged through Muslim neighbourhoods in Delhi, beating anyone they found, and setting fire to homes and shops.

The unrest has caused ripples in Britain, home to about 1.5 million people of Indian heritage, making the population the largest ethnic minority group in the UK.

There have been a series of protests in London, with hundreds of students and others gathering in solidarity with Indian Muslims under attack. Some have been held outside the Indian High Commission, including one last week which called for the resignation of Amit Shah, the Home Minister, and the arrest of BJP politicians alleged to have orchestrated the pogroms.

Others have met at the statue of Gandhi in Parliament Square in Westminster, under the banner of “defending the Indian Constitution”. Many Indian and South Asian university societies have become involved, as well as some smaller left-wing and socialist movements including the Indian Workers’ Association (GB) and South Asia Solidarity.

The communal violence has also had the unintentional effect of exposing fault lines among British Asians.

Numerous Muslim politicians, leaders and groups have spoken out against the aggressive Hindu nationalism increasingly displayed by the BJP government. But there has also been some moderate resistance, or at least silence, from British Indians of Hindu backgrounds.

Khalid Mahmood, the Labour MP for Birmingham Perry Barr, who was born in Pakistani Kashmir, asked in the House of Commons last week if the government would make a statement on the violence in India. In response, Nigel Adams, the Minister for Asia, said the Foreign Office was monitoring the developments and urged restraint “from all parties”.

“We trust that the Indian government will address the concerns of people of all religions in India. We also condemn any incidents of violence, persecution or targeting of people based on religion or belief,” he said.

Government officials had raised concerns with their Indian counterparts over both the Citizenship Amendment Act’s exclusion of Muslims and police response to protests against it, he said. But Mr Mahmood said he found Mr Adams’s words “facile”, before accusing the Indian Prime Minister, Narendra Modi, of fomenting ultra-nationalist “brutality”.

Next to speak in the debate was Bob Blackman, the Conservative MP for Harrow East, an area in London in which one in four people is of Indian heritage (and most of those from the majority Hindu Gujarat region of India). In his intervention he noted Hindus as well as Muslims had died in the rioting and said the police were making hundreds of arrests and conducting community meetings to calm tensions in Delhi.

Mr Blackman is also chairman of the All-Party Parliamentary Group for British Hindus and in January was given India’s fourth-highest honour, the Padma Shri, for his support for Britain’s Indian diaspora.

Later on during the debate, several other Muslim MPs echoed Mr Mahmood’s condemnation of the BJP and Mr Modi. Both Britain’s Sikh MPs also rose to press their concerns that all religious minorities, not just Muslims, were under threat from Hindu nationalist mobs.

Attacks on the BJP cut across party lines, as well. The Conservative Baroness Warsi, who was previously Minister for Faith and Communities, tweeted during the rioting: “The warning signs of what a Modi government would unleash were clear to anyone who remembers the horrors of the Gujarat pogroms whilst he was Chief Minister. The fascist ideology that underpins the RSS [Rashtriya Swayamsevak Sangh, a right-wing Hindu supremacist organisation] and BJP is slowly destroying both India and Hinduism.”

Prominent Muslim campaigners, including Harun Khan, the secretary-general of the Muslim Council of Britain, have also condemned the Citizenship Amendment Act and anti-Muslim violence.

“The UK is home to 200,000 Indian Muslims,” he said. “The current situation is hugely concerning for many British Indians who are worried about the erosion of human rights of their families and loved ones across India.”

But as well as concerns about India, Mr Khan said the Muslim Council was worried about Hindu ultra-nationalism division spreading within British Asian communities. He called on Dominic Raab, the Foreign Secretary, to convene a meeting urgently with representatives from each part of the Indian diaspora in Britain to stop “sectarian division” taking root.

In contrast, British Hindu advocacy groups have largely stayed out of the growing row. Rajnish Kashyap, the secretary-general of the Hindu Council UK, said he did not want to comment on what was happening far away in a different country. “You need to leave it, let the government in India sort out what is going on.” However, he added that the council was “concerned” by the events in Delhi which they believed should not have happened.

The Indian High Commission in London has also not responded to a request for comment. However, according to the Press Trust of India news agency, the commission has been circulating official Indian government briefing documents in Britain which provide talking points defending the Citizenship Amendment Act and denying it targets any religious minorities.

Although parts of the British Asian community have responded differently to the crisis, there is no evidence now of any communal tension between Muslims and Hindus in the UK.

Dr Sadek Hamid, a researcher at Oxford University’s Centre for Islamic Studies, said the anti-Muslim pogroms had not, in his experience, caused any tensions with Hindus in Britain. A bigger concern for British Muslims was the sense of a growing indifference internationally to the suffering of Muslim minorities in places such as Myanmar, China and, now, India too.

The BJP has historically found most of its support from India’s Hindu majority, unlike its main rival party, Congress, which has tended to draw backing from all of India’s religious and ethnic groups.

The party is closely linked to the Rashtriya Swayamsevak Sangh (RSS), a nationalist, right-wing group dedicated to promoting the ideology Hindutva, or Hindu supremacy.

Before he became prime minister, Mr Modi – who is a member of the RSS – was chief minister of Gujarat and his administration has been widely described as complicit in communal violence against Muslims there in 2002.

Since Mr Modi’s government took office, there has been a sharp rise in intimidation, oppression and attacks against India’s Muslim minority. Numerous cases have revolved around allegations that a Muslim family or business had killed or eaten cows, an animal revered as holy by Hindus.

Although Mr Modi and the BJP do not openly support vigilantism, they have been accused of failing to clamp down on anti-Muslim and Hindu nationalist violence and BJP figures often downplay the significance and prevalence of such attacks. Few Hindus accused of involvement in these incidents have been arrested or prosecuted either.

Although some defenders of the government insist the recent attacks in Delhi and elsewhere were not explicitly targeting Muslims or carried out by Hindu nationalists, numerous reports suggest the mobs shouted Hindu slogans, notably “Jai Shri Ram” (“Victory to Lord Rama”, a  Hindu deity).