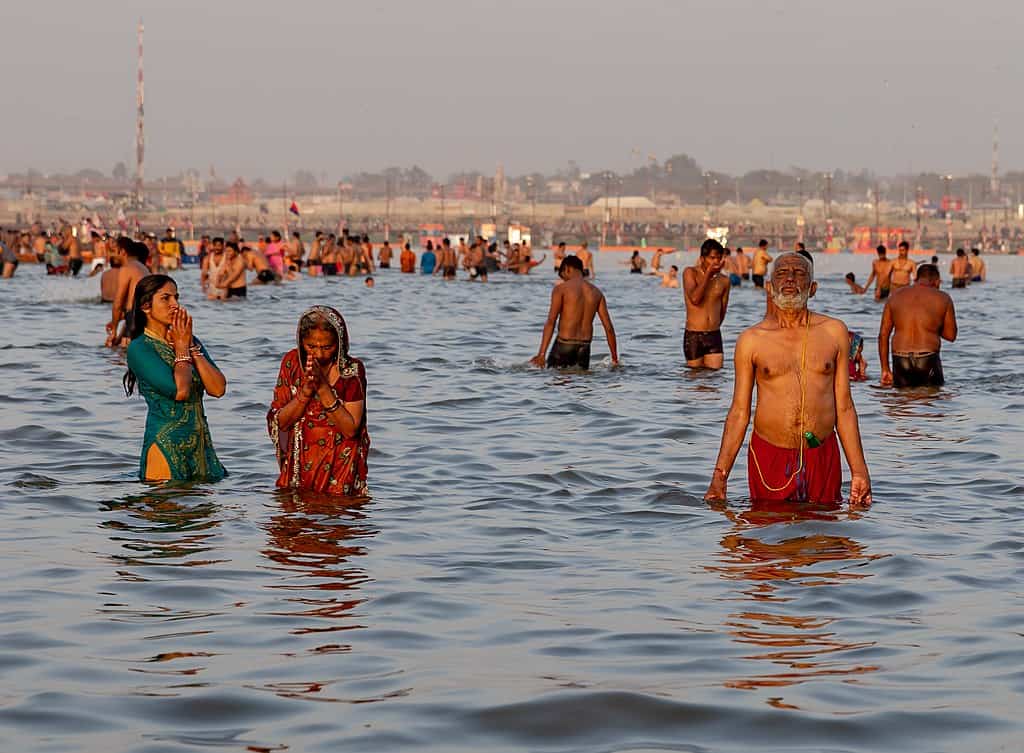 Hindu festival in the Himalayas may be a Covid super-spreader

India’s health ministry is warning that a huge gathering of devotees for the Mahakumbh Hindu festival could send coronavirus cases surging, Reuters reports. Forty people near the site in the Himalayan holy town of Haridwar, beside the Ganges, have tested positive in a country recording the highest new infections for nearly four months. The festival is held once every 12 years and will last weeks, into April. Millions of Hindus are expected to attend next month, as bathing in the river during this period is believed to absolve people of sins and bring salvation from the cycle of life and death. The report says 55,000 people are tested there every day but there are fears this is not enough in an audience of millions.

A government faith adviser, minister and civil servants are shaping new relationships with faith organisations in a process propelled by the pandemic. Catherine Pepinster considers how a consultation with faith groups over opening places of worship turned into a recognition of their engagement with people that government struggles to connect with. The collaboration process may lead to an office of faith-based and neighbourhood partnerships. Full story on our website here

This weekend, the spring equinox marked the start of the Persian new year, a date celebrated by diverse societies including the Bahá’is, for them a time of spiritual renewal and new aspirations. This year, as preparations were being made, the international Bahá’i community came together to condemn the treatment of Bahá’is in northern Iran, appealing that land confiscated by the state should be returned. The Baháʼí faith is not recognised in the post-revolutionary constitution of Iran and its followers have been deprived of the right to practise their religious beliefs. Full story on our website here.

A report from the Church of England’s Anti-Racism Taskforce has been leaked to The Spectator. It suggests introducing a quota for BAME people on programmes such as leadership and training. A CofE spokesman said that a newspaper headline suggesting it would set a quota for BAME clergy was wrong. Last year, at the height of the Black Lives Matter protests, the Archbishop of Canterbury told the General Synod that he was “sorry and ashamed . . . that we are still institutionally racist”. There is only one BAME bishop out of a total of 42; and 93.7 per cent of senior staff are white British. The CofE says the taskforce is reviewing past promises and will propose swift action. There is no correction to The Spectator article. The taskforce aims to publish its final report on 22 April 2021 — Stephen Lawrence Day.

More than 80 religious leaders are supporting the National Day of Remembrance tomorrow, to remember those who have died, suffered and been bereaved in the coronavirus pandemic. Promoted by the charity Marie Curie and supported by the Together Coalition, the leaders are encouraging members to observe a minute’s silence and follow with commemorative events at noon on Tuesday 23 March, the first anniversary of lockdown. The leaders say that the moment of reflection will remind people that “we are there for each other”. Julie Siddiqui, founder of Together We Thrive, who co-ordinated the letter, said people of faith had seen first-hand the scale of the loss over the past year. The day is crucial as a signal that all people care about others loss.

Happiest nations have people who trust and co-operate

The United Nations 2021 World Happiness Report reports that people have found happiness despite the pandemic through trust in each other and confidence in their governments. The report puts Finland as the happiest nation on earth. The UK comes in at 18 and the bottom ranking goes to Zimbabwe. Among majority-Muslim countries, UAE is in top place, but sits at 25th in the world. The report’s lead, Jeffrey Sachs, said the pandemic reminded us of our global environmental threats, the urgent need to co-operate, and the difficulties of achieving co-operation.

The Rev Tim Hewes, an Anglican priest from Wantage in Oxfordshire, has been jailed for 14 days after gluing himself to courtroom furniture in a protest at climate change inaction. The protest was staged at City of London Magistrates’ Court in relation to charges from the Extinction Rebellion protest in September 2020. He was with three other defendants from Christian Climate Action, who all made the same protest. Ben Buse, a research associate and Anglican from Bristol was also jailed. The Rev Sue Parfitt, aged 79, and Ruth Jarman, a scientist, were released under investigation. They said they took action because of the court’s apparent “complicity” with the government in failing to act on climate change.

The National Secular Society is calling for an end of compulsory worship in schools in Wales after reforms that make compulsory the teaching of religion, values and ethics. This change has been welcomed by humanists who say they are now on an equal par with religion. The society says there remains a “bizarre requirement” for pupils to take part in a daily act of worship, which must normally be “wholly or mainly of a Christian character”. It says this is anachronistic and in effect enforced and is calling on all political parties to support its cause.

BBC programmes about religion: Faith Hope and Spring for 2021

Last week, the BBC announced what it called “a range of dedicated content across its networks under the heading ‘Faith and Hope for Spring 2021, enabling faith communities to reflect on the past year amid the challenges faced, but also look forward with hope and optimism”. Plans include the first collaboration between BBC One, BBC Radio 4 and local radio to bring audiences a live service with the Archbishop of Canterbury from Canterbury Cathedral; and a range of content to mark other faith festivals this spring including Passover, Holi, Ramadan, Vaisakhi, Vesak Day and Eid. Roger Bolton listened as the plans were unveiled and his analysis is on our website here.

Egg-shaped baubles and rabbit decorations are “flying off shelves” as Easter is turned into a festival to rival Christmas, The Sunday Times reports. Artificial Easter trees, Easter front door wreaths, rabbit-themed Easter crackers and candles that smell like hot cross buns are turning into seasonal favourites, it reports.