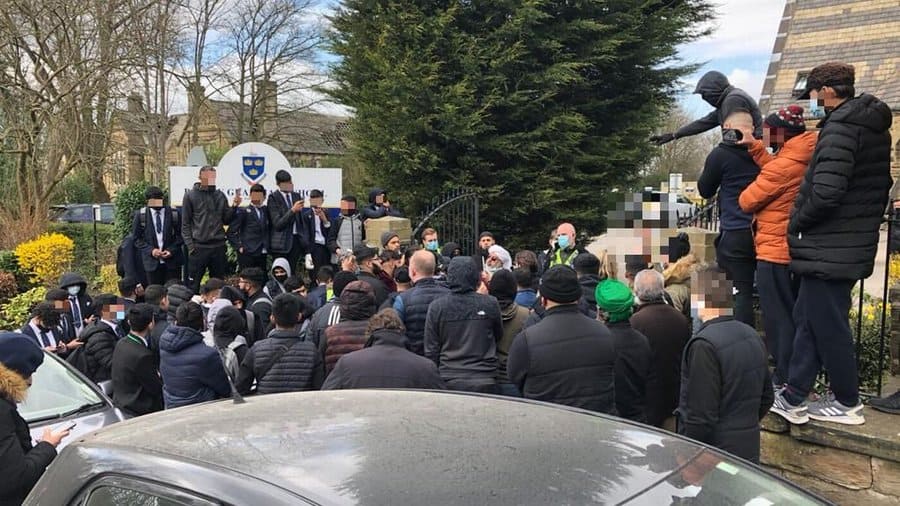 Department for Education criticises threats and nature of protest over cartoon

A protest by about 100 parents at Batley Grammar School, West Yorkshire, over a teacher showing a cartoon of the Prophet Muhammad, has been criticised by the Department for Education as “completely unacceptable”. The parents said the incident had offended the whole Muslim community. The head teacher apologised unequivocally and said the member of staff involved had also apologised and has been suspended pending an investigation.

The Department for Education said: “It is never acceptable to threaten or intimidate teachers. We encourage dialogue between parents and schools when issues emerge. However, the nature of protest we have seen, including issuing threats and in violation of coronavirus restrictions are completely unacceptable and must be brought to an end. Schools are free to include a full range of issues, ideas and materials in their curriculum, including where they are challenging or controversial, subject to their obligations to ensure political balance. They must balance this with the need to promote respect and tolerance between people of different faiths and beliefs, including in deciding which materials to use in the classroom. We are aware of the events taking place at Batley Grammar School and are in contact with the school and local authority.”

Imam Qari Asim, who chairs the Mosques and Imams National Advisory Board and is imam at the Makkah Mosque in neighbouring Leeds, sympathised with the parents and pupils: “People have a right to express their concerns and hurt but protests can’t always achieve what can be achieved through constructive dialogue. Fair investigation by the school, in consultation with the parents, should be allowed to take place. We do not want to fan the flames of Islamophobia and provoke hatred or division. I am urging everyone to continue to work together to ensure that no community is inappropriately targeted or portrayed. I am relieved that resources to speak about religion in the future will be better moderated in collaboration with teachers, parents and relevant education authorities.”

Baroness Warsi said on Twitter: “Blasphemy has long been debated and discussed in numerous faiths and so is a legitimate topic for discussion in a religious education curriculum. Indeed until just over a decade ago we still had, albeit not used, blasphemy laws on our statute books! An RE teacher taught blasphemy by using the #CharlieHebdo cartoons depicting the Prophet Muhammad wearing a ‘bomb’ turban. This, according to parents at the school, created a hostile atmosphere and led to Islamophobic discourse and language. Islamaphobic bullying in the playground is well documented and taunts such as ‘terrorist’ are regularly used leading to issues around mental health and poor educational outcomes. This is a child safeguarding issue not a cartoon issue. It’s about smart teaching not point-scoring and while tragically Covid continues to kill, can I urge the small but noisy group of protesters to calm down and go home. There are better ways to enjoy the good weather.”

The Chief Rabbi, Ephraim Mirvis, has suggested that Jewish community life will change after the pandemic. In an article in the Jewish Chronicle, he said small services should be held in houses and gardens and festivals should be scaled down. “We have learnt that there is something precious about life-cycle events with greater online accessibility, smaller physical gatherings and less ostentatious celebrations,” he said. Covid-19 had given the opportunity to re-imagine Jewish communal life, with people feeling more engaged because leaders had reached out to find other ways of connecting.

The Northern Ireland Secretary Brandon Lewis was forced to defend his move to compel Stormont to commission abortion services, following a delay of more than a year since legislation was passed. He answered an urgent question in the Commons brought by the DUP MP for Upper Bann, Carla Lockhart, who said the move breached the Belfast Agreement. Mr Lewis said it was unacceptable that women and girls could not access abortion services despite the law being in place. The Alliance MP Stephen Farry said most women in Northern Ireland support the Government stepping in and there was large scale support for his action.

The Baptist Union Council has voted not to invest in companies that trade fossil fuel extraction, refining and distribution. The proposal marks their stand before the UN Climate Conference in Glasgow in November. It was brought by the Rev Dr Dave Gregory, Convenor of the Baptist Union’s Environmental Network, and a former meteorologist at the Met Office and the European Weather Centre.

The Guardian has a story of an Instagram account PreachersNSneakers which has 100,000 people following pictures of Christian leaders wearing very expensive clothes. They include a pastor wearing a $3,600 leather jacket; a preacher wearing a $1900 sweatshirt and a worship leader for $604 trainers. The site was created by churchgoer Ben Kirby who said he is still working out the relationship between religion, wealth and fame.

Five religion festivals coming up – dates for your calendar

A busy religious festival season starts with Passover this weekend and all have to be adapted to Covid-19 rules. We have fact sheets on all of them – click on the links below:
Passover: 27 March – 4 April
Holi: 28-29 March
Easter week: Palm Sunday 28 March – Easter Sunday 4 April
Ramadan: 12 April – 12 May
Vaisakhi: Tuesday 13 Apri