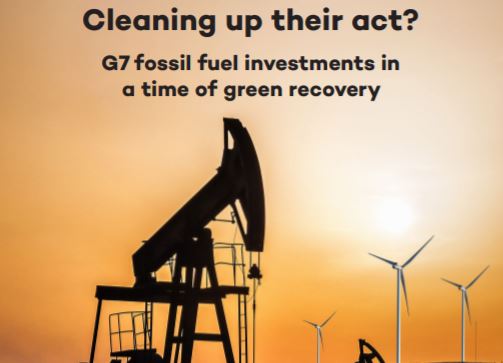 A report from the evangelical aid charity Tearfund says during the Covid-19 pandemic, G7 nations have been pumping more money into fossil fuels than they have into clean energy. Cleaning up Their Act? suggests that new commitments are a positive step towards keeping global warming to 1.5C, but don’t go far enough and the G7 should honour their collective pledges to ‘build back better’ in the wake of Covid-19. It says G7 leaders meeting in Cornwall next week should announce an acceleration towards cleaner, more equitable societies or “lock the planet into catastrophic and irreversible climate change”. G7 nations are Canada, France, Germany, Italy, Japan, the United Kingdom and the United States.

Conservative MPs are mounting a rebellion against the government’s decision to reduce the international aid budget from 0.7 per cent of national income to 0.5 per cent. The decision was taken in November 2020, with the reason being to save money in the Covid-19 financial crisis. But there was widespread criticism, including from aid agencies, the Archbishop of Canterbury and Cardinal Vincent Nichols. The amendment to be discussed next week — in the week of the G7 summit in Cornwall — has attracted four former Tory cabinet ministers and chairs of eight powerful Commons committees, according to the BBC. The government has an 80-seat majority, but rebels are confident they have enough support to get the amendment through.

A project to build the “Eternal Wall of Answered Prayer”, between the M6 and M42 in the West Midlands, has received enough money to enable a road to be built to the site at Coleshill. The wall will be made from one million bricks, forming a loop, double the height of the Angel of the North. Each brick will represent a prayer — so far 26,505 have been submitted, with organisers saying they will include examples from 600AD to date. The wall has an estimated cost of £9.35m and £678,320 has been raised so far, with the promise of a seven-figure sum in the near future. Interns are being recruited to turbocharge donations in the autumn, from events such as a sponsored cycle ride from Hadrian’s Wall to the site. The project’s chief executive, Richard Gamble, a former chaplain to Leicester City Football Club and a member of the independent Chroma Church in Leicester, says it is hoped that work will start this year and the project completed next year. Work on the access road is due to start in September and a competition is being held to name it. He said: “We are holding onto the vision to build the eternal wall of answered prayer in the UK so that we can tell the nation that Jesus is alive, he listens and answers prayer and we can make hope visible”. Read our report when the campaign was launched here

The former Labour MP Luciana Berger, who left the party after branding it “institutionally antisemitic” has hinted at a return to politics. In an exclusive interview with Lee Harpin of Jewish News, she said: “Who knows what the future holds? … I’m really happy where I am now. But never say never.” Ms Berger, now managing director of the public affairs and advocacy practice at Edelman UK, is engaged in Jewish community affairs as vice-president of the Jewish Leadership Council and as a contributor to the mental health taskforce for Jewish schools.

Canada’s indigenous services minister has urged Pope Francis to issue a formal apology for the role the Catholic Church played in Canada’s residential school system, days after the remains of 215 children were discovered at a school in British Columbia. The Associated Press reports that work is continuing to find more unmarked graves at the former residential schools for indigenous children taken from families across the nation. The report says that the Kamloops Indian Residential School was Canada’s largest such facility and was operated by the Roman Catholic Church between 1890 and 1969 before the federal government took it over as a day school until 1978, when it was closed. Nearly three-quarters of the 130 schools were run by Catholic missionary congregations. A papal apology was one of the 94 recommendations from a Truth and Reconciliation Commission, and in 2017, prime minister Justin Trudeau asked the Pope to consider such a gesture.

Eight Muslim leaders in the Indian state of Uttar Pradesh, who opposed the demolition of their mosque by the local government, are accusing the police of making false allegations against them. The Guardian reports that when the case came before the court, judges found that the state government had provided no proof to the court of falsified or forged documents, but gave the government three more weeks to produce the evidence. The mosque was demolished last month when the local government said it was an “illegal structure” intruding on government land. Muslim leaders are demanding it is rebuilt

Investigation into sex abuse and cover-up in Cologne

Pope Francis has ordered an apostolic visitation of the Archdiocese of Cologne, which has been embroiled in scandal over priestly sexual abuse and a cover-up, The Tablet reports. In the first half of June, the Bishops of Rotterdam and Stockholm will investigate actions of Cardinal Rainer Maria Woelki, Archbishop of Cologne; Stefan Hesse, the former head of personnel in Cologne, now Archbishop of Hamburg; and Dominik Schwaderlapp and Ansgar Puff, the auxiliary bishops of Cologne. The cardinal has already been exonerated by the Congregation for the Doctrine of the Faith.

Two-thirds of Americans pray once a week

Research from the Barna Group says the majority of Americans (64 per cent) pray to God at least once every seven days, a fall from 83 per cent in 2012. They include people of all faiths and none. The research also suggests that three in 10 American adults read the Bible at least once a week. The top-ranked city for both prayer and Bible reading is Monroe, in northern Louisiana, with other southern cities and towns not far behind.