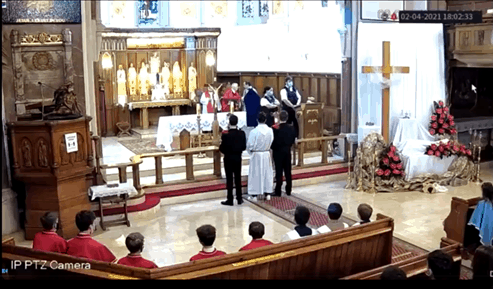 The president of Humanists UK, Professor Alice Roberts, provoked a polarised debate on social media, by tweeting on Good Friday: “Just a little reminder today. Dead people — don’t come back to life.” Her detractors, from atheist to Christian, criticised it as trolling, being unkind, disrespectful, intolerant to Christians on their holiest day. But she said no beliefs should be beyond scrutiny and criticism, nor should they be pushed on to children.
The screenwriter and author Frank Cottrell-Boyce swiftly responded: “Which is why it was such a kick-ass miracle.”
There followed a nuanced debate about what exactly the resurrection of Jesus was.
Prof Tom McLeish: “A seasonal reminder to you that Jesus’ resurrection is not ‘a dead person coming back to life’ any more than a green shoot is a seed ‘coming back to life’.”
Bishop Nick Baines: “She is right, though. Dead people don’t come back to life again. That would be resuscitation. Christians believe that “God raised Christ from the dead” — which is different.”
The Rev Richard Coles: “Hey, angry Twitter, @thealiceroberts is right. Dead people don’t come back to life. Believe me, I know. When Christians like me proclaim the resurrection it is not to refute biological truth. It is an expression of faith in the power of God, which is measureless.”
Archbishop of Canterbury (on Easter Sunday): “Today Christians celebrate with faith and certain knowledge that Jesus was raised from the dead. While I disagree with Prof Alice Roberts of the Humanists, I thank God that we live in a country where she can speak freely. As we proclaim the truth of Christ’s resurrection, let’s do so with love and respect for those who don’t agree.”

Another tweet caused offence, this time from Nadhim Zahawi, the minister for business and industry, who is also in charge of Covid vaccine distribution. This showed a picture of the cross, the words “Good Friday” and the Conservative Party logo. Responders said it was insensitive, disrespectful and crass. But the post stayed up and on Easter Sunday, when he posted a picture of eggs in a nest, with the Conservative Party logo and the words “Happy Easter”.

In his Easter sermon, the Archbishop of Canterbury, Justin Welby, urged people to choose a “better future for all” and to ensure acts of love, charity, and international aid are maintained. “In this country, in this world, we have a choice over the next few years. We can go on as before Covid, where the most powerful and the richest gain and so many fall behind. We have seen where that left us. Or we can go with the flooding life and purpose of the resurrection of Jesus, which changes all things, and choose a better future for all.”

Pope Francis, in his Easter message, Urbi et Orbi (to the city and the world), spoke of hope and comfort for those suffering from the pandemic, the sick and the bereaved, and that “the Lord might sustain the valiant efforts of doctors and nurses”. Everyone had a right to care and essential vaccines, especially in the poorest countries, he said. Coronavirus safety measures meant the message was delivered inside St Peter’s Basilica. St Peter’s Square, normally filled with the faithful, lay empty.

‘Heavy-handed’ police intervention to clear a church on Good Friday

The Metropolitan police have been criticised for heavy-handedness in breaking up a Polish Catholic church service in Balham on Good Friday. In a video posted on social media, police officers were seen speaking to the priests then going to the microphone telling the congregation it was an unlawful gathering and the people should go home or face fines. A statement posted on the website of Christ the King Polish Catholic church insisted it had met all government requirements and the police had misunderstood regulations on church services during the pandemic. The Met said some people were not wearing masks and people were clearly not socially distanced. No fines were issued. On Sunday, police returned to the same church, where parishioners were kneeling outside while listening the service on speakers.

The Church of England has withdrawn prayers and a video designed for people to observe Maundy Thursday at home, after criticism that it resembled a Christianised Seder — the Passover meal. The Rev Dr Richard Sudworth, the Church of England’s national inter-religious affairs adviser, said the prayers and actions were offered to help families be mindful of the events of the original Last Supper. He apologised for any offence caused.

Archbishop of York seeks ‘chief companion’ for £90,000 a year

The Archbishop of York, Stephen Cottrell, passionate about poverty and social justice causes, is advertising for a “chief companion” for £90,000 a year. In an advert on Charity Jobs, he  is looking for someone to help conduct his ministry within the life of the nation, the Church of England and the Anglican Communion. “You will be the archbishop’s chief companion, support and critical friend for developing and refining this vision, aligning his work with the dioceses and central structures of the Church of England, ensuring his time is used effectively and strategically, and making it happen,” it says.

The Jewish Aalborg cemetery in Denmark was vandalised by a neo-Nazi group on Saturday night, as Passover came to an end, a news agency reports. Dolls covered in red paint fake blood were placed next to wall daubed with the paint and neo-Nazi flyers were found with a link to the website of Nordfront, a Danish “national socialist news site”.