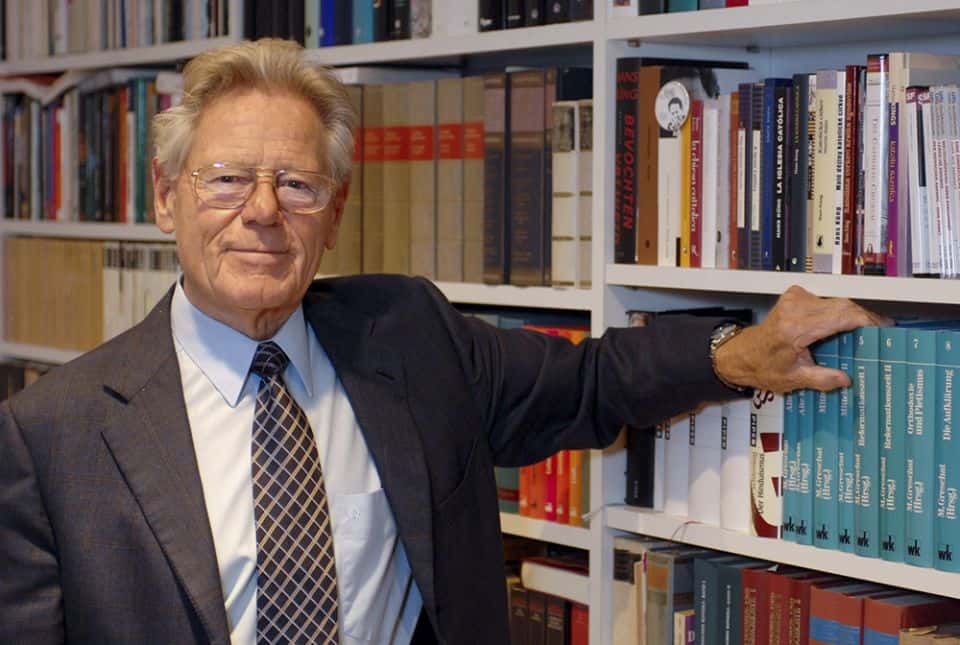 The Catholic priest and theologian Hans Küng has died at the age of 93. A prolific author, teacher and speaker, he spent his life understanding how authentic truths of Christianity could flourish despite modernity and ecclesiastical constraints. He was the youngest theologian to participate in Vatican II, the council that dramatically modernised aspects of the Catholic Church in 1962-65. He challenged papal infallibility, the celibacy of the priesthood and resistance to artificial contraception, and made a case for lay people to preside over communion. In 1979 the Vatican revoked his licence to teach as a Catholic theologian at the University of Tübingen, but he remained a priest, confounding critics who wanted him excommunicated. In later life he was president of the Foundation for a Global Ethic, in public dialogue with world leaders on international peace, religion and science, and medical ethics. His 1974 book On Being a Christian explored how the Jesus of history teaches people to live, act, suffer and die “in a truly human way”. An appreciation in the National Catholic Reporter said: “He was the dissident, the bête noire, the disobedient, the heretic, the apostate, the errant, the Protestant. In short, “l’enfant terrible of the Catholic Church.”

Two Christian leaders in England, the Archbishop of Canterbury, Justin Welby, and Cardinal Vincent Nichols, the Archbishop of Westminster, have condemned the government’s cut to international aid as deeply worrying and a broken promise. In a joint article in the Evening Standard, they say: “Balancing the books during a pandemic on the backs of the world’s poorest is not acceptable.” It is a question of morality with cuts in aid to Yemen, for example, doing real damage. The chancellor announced in November last year that the aid budget would reduce from 0.7 per cent to 0.5 per cent of national income as difficult choices were necessary in the economic fall out from the pandemic.

The Labour leader Sir Keir Starmer has apologised for the “hurt” caused by his visit to Jesus House, a majority black evangelical church in London, whose senior pastor, Agu Irukwu, has spoken out against same-sex marriage and equality legislation. He signed a letter with other Christian leaders, to the Telegraph in 2006, opposing the sexual orientation regulations, saying: “The regulations force Christians in churches, businesses, charities and informal associations to accept and even promote the idea that homosexuality is equal to heterosexuality. For the sake of clarity, this is not what the Bible teaches and it is not what we believe to be the truth. In our view, these regulations are an affront to our freedom to be Christians.” Jesus House is regarded as the cathedral of the Redeemed Christian Church of God. It has opened as a vaccination centre and runs a food bank, but Sir Keir accepted it was a mistake to visit: “I completely disagree with Jesus House’s beliefs on LGBT+ rights, which I was not aware of before my visit”. But his apology has caused yet more internal debate with questions on social media as to how his office was unaware of the pitfalls a visit would cause.

The Bishop of Dover, Rose Hudson-Wilkin, has taken issue with the government’s review of racial disparities in Britain, which said the success of much of the ethnic minority population in education and the economy should be regarded as a model for other white-majority countries. In an interview on Good Morning Britain, the bishop said Britain would become an example when she walked into establishments and she did not see black people only sweeping floors, doing the cleaning and the catering, but sitting around every table up and down this land.

Saudi authorities have said that only people immunised against Covid-19 will be allowed to perform the year-round Umrah pilgrimage, starting from the beginning of Ramadan on 12 April. Saudi Arabia has reported an increase in infections and it is not clear whether the same restriction applies to the Hajj, due to take place from 17-22 July.  This is the second year of disruption for the pilgrimages. Last year 10,000 Muslim residents of Saudi Arabia took part in the Hajj, compared with 2.5 million Muslims from around the world the previous year. British Hajjis UK is currently advising British Muslims not to make any travel plans or bookings for Hajj 2021.

Children serving at the Good Friday mass in a Polish church in London are said to have been terrified when police came to the microphone demanding that all the congregation leave as the service was breaking lockdown rules. Fr Aleksander Dasik told The Tablet that the police action had left parishioners distressed and in tears. The church says it had obeyed guidelines and accused the police of abusing their powers, revealing that the police had earlier visited Polish churches in Slough and Wolverhampton and subsequently apologised. The Polish Embassy said it was in touch with the Polish Catholic Mission and gathering information about the incident.

China has produced a state backed musical, The Wings of Songs, to offer a joyous picture of Uyghur people singing and dancing, The New York Times reports. This is in stark contrast to the stories of detention, forced labour and genocide that have been condemned around the world. China has always denied wrongdoing. The film tells the story of three young men, a Uyghur, a Kazakh and a Han Chinese, who came together to pursue their musical dreams. Uyghur women dance in Bollywood style, and a Kazakh man serenades friends with a traditional two-stringed lute. The paper quotes Nury Turkel, a Uyghur-American lawyer and senior fellow at the Hudson Institute in Washington: “The notion that Uyghurs can sing and dance so therefore there is no genocide — that’s just not going to work”.