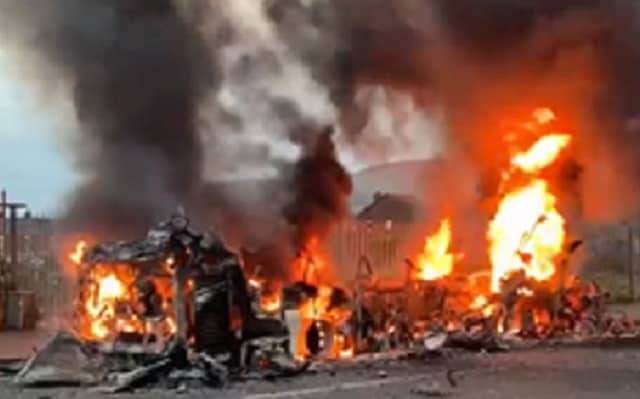 Church leaders in Northern Ireland are appealing for calm after a week of sectarian riots that police say are the some of the worst acts of violence in recent years. Petrol bombs and stones have been hurled and cars and a bus set alight. Church of Ireland bishops have called for an immediate stop to the violence. Dr David Bruce, moderator of the Presbyterian Church in Ireland, called for those involved and orchestrating it to stop immediately. He said there were significant underlying issues particularly among those who felt their identity had been threatened and undermined as a result of Brexit and the Northern Ireland Protocol. “This is compounded by a growing sense of hopelessness manifested in a lack of economic progress, reduced opportunities for employment, and educational disadvantag,” he said. But he, along with political leaders, stressed that these issues would be solved only through dialogue and political will.

The Archbishop of Canterbury, Justin Welby, has admitted getting things wrong at the start of the coronavirus pandemic, when churches shut in the lockdown. In an interview for the Financial Times, he said: “I didn’t push hard enough to keep churches available for at least individual prayer in the first lockdown. We also said clergy couldn’t go in, and personally I feel I made a mistake with that.” In the wide-ranging conversation, he also reflected on the marriage of Harry and Meghan, observing that for royals: “It’s life without parole, isn’t it?”, and noting that Edward VIII after abdication was followed everywhere: “We expect them to be superhuman”. He was speaking in advance of his book Reimagining Britain: Foundations for Hope, rewritten during the pandemic. He spoke of the enormous toll on people from Covid-19 and said the country had a national case of post-traumatic stress disorder, pointing to the extreme distress of the bereaved who were unable to say goodbye to loved ones in hospital, communicating only through an iPad. His book is published next week.

A campaign group has created a memorial wall of red hearts in London for the 150,000 people who have died of the coronavirus in the UK. Covid-19 Bereaved Families For Justice started the mural on the South Bank opposite the Houses of Parliament 11 days ago. Thousands of red hearts have been drawn, some bearing a name of a loved one, signed by their family and friends. It stretches for a third of a mile. The group wants the mural to stay as a permanent memorial to show the scale of loss.

Remembering the Holocaust and viewing glimmers of hope

The 69th Holocaust and Heroism Remembrance Day, Yom HaShoah, has been observed across the world with online events including a candlelight ritual and a symposium on medical ethics then and now. It featured top scientists prominent in the global fight against Covid-19 including Pfizer chief Albert Borla, whose parents survived the Holocaust; and Dr Anthony Fauci, the chief medical adviser to the US President, who was honoured with the Moral Courage in Medicine award for lifetime achievements including his work in combating Covid-19. In the UK, the National Yom HaShoah Commemoration “Remember Together — We Are One” included five videos with comedian Matt Lucas, snooker player Ronnie O’Sullivan, broadcaster Robert Peston, businesswoman Karren Brady and Love Island star Eyal Booker talking to Holocaust survivors. The day ended with a film on how grief in 1939-45 gave way to a hopeful future.

The festival of Ramadan starts on Monday 12 April and once more it will be a season changed by Covid-19 restrictions. The Muslim Council of Britain has issued guidance on social distancing in mosques, holding outdoor events, observing fasting and itfaars, which it says should be kept within one household. There are virtual Itfaar packs available with tips to illustrate how to celebrate at home produced by the Ramadan Tent Project. During this season, Muslims fast from sunrise to sunset — about 16 hours a day in the UK — and scholars have reiterated advice that taking the vaccine in this time does not invalidate the fast. Read more about Ramadan in our factsheet here:

Churches Together, an umbrella group for churches in Britain and Ireland, is holding a webinar for top church leaders to debate the controversial Commission on Race and Ethnic Disparities, which concluded that Britain was an international example of racial equality. The commission’s chairman, Dr Tony Sewell, said the report did not deny that racism exists in Britain, but there was no evidence “of actual institutional racism”. The webinar “A Moment of Dishonour” will give vent to widespread criticism from people who say that the denial of institutional racism puts the blame wrongly on individuals. The webinar features leading black Christian academics and church leaders from many denominations.

Religious leaders, academics, health and child abuse professionals in America, are meeting for a three-day symposium to initiate better co-operation in tackling child sex abuse. Organised by Harvard University in partnership with the Pontifical Commission for the Protection of Minors and the Catholic University of America, the event will allow people to share research, experience and best practice, leading to a greater awareness of the gravity and extent of abuse and promoting co[operation to prevent it. In a message of support, Pope Francis said he hoped it would help eradicate a profound evil. Organisers hope the starting day of the event — 8 April — will become known as the World Day of Child Sexual Abuse Prevention, Healing and Justice.

The BBC broadcaster, the Rev Richard Coles, is among 36 people to receive the Archbishop of Canterbury’s Lambeth awards, recognising outstanding contributions to the Church of England, the Anglican Communion and wider society. The citation for the Alphege Award for Evangelism and Witness. says he is “an admired and popular Christian presence” in the public eye . He is the vicar of St Mary the Virgin, Finedon, in Northamptonshire; a musician and former member of the Communards, which had several top ten hits in the 1980s; and is now co-presenter of Saturday Live on BBC Radio 4.

The face of Jesus and saints in a stained glass window of a church in a Lincolnshire village, have been shot at and smashed by an air rifle or catapult over the Easter weekend. The Churches Conservation Trust said it was devastated at the attack on St Helen’s, Little Cawthorpe, and the damage caused which will cost thousands to repair. Lincolnshire police are investigating.